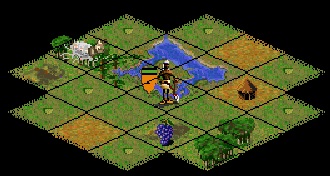 The pentagon is large enough so that no two capital cities share a tile yet small enough that each capital’s border touches that of some other capital.

The challenge here is to win before Mongols do.

We are going to play on this map twice. This first round, will be OCC. Next round, this Fall, will be a regular game. This is going to be a rather unusual OCC due to the proximity of so many rivals and the fact that late game multilateral warfare is all but inevitable.

Starting Techs:
~ None
Other info: Rivals start with one settler and no techs.

Special rules: One City Challenge. You may not have more than one city at any point in the game with one exception: If a rival has launched a space ship that is going to beat yours you may take their capital. If you do so, at the end of your turn there may not be any of your units left in the capital. If they have movement points left move them out, otherwise you must disband them.

You may replay as many times as you wish. But you get to submit only one game; your best outcome obviously. I should explain that replay means going back to the starting save and playing from there. Going back to some intermediary save is considered cheating. Reloading for a different battle outcome is also considered cheating.