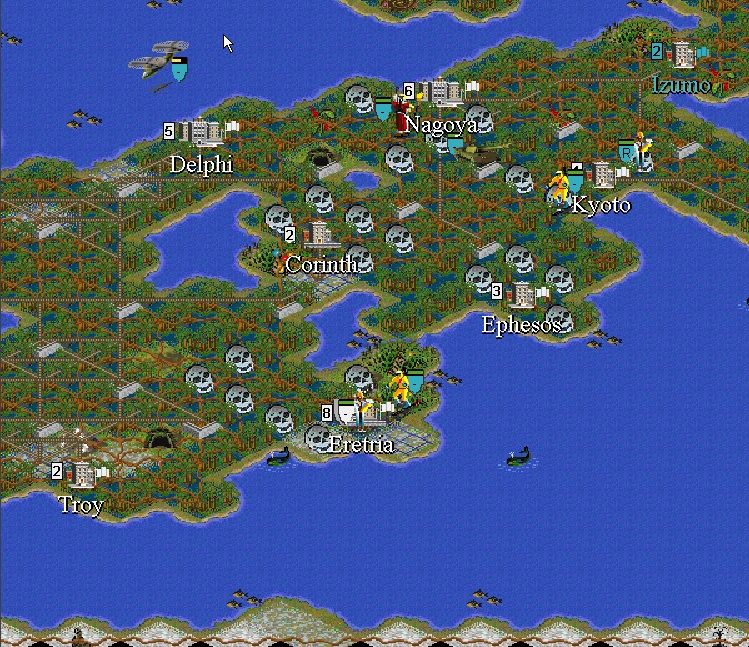 Game Settings:
Civilization: Celts
Map: Known game generated map, 4 civ’s
Difficulty: Warlord
Barbarians: Raging Hordes
Restarts: On
Conquest of the original rivals (Vikings, Americans, and Sioux)
(Typically you have to deal with respawns as well, but we have decided to relax that here.)

Special conditions:
This is a 500 turn scenario based on the now famous 10-year game of Lycerius. (If you have not yet heard about it, search for his name on the internet and in this Civ 2 forums.) Game starts in 3991, based on the save uploaded by Lycerius. However, because of the mechanics of creating it, a turn of production (not movement) has taken place compared to the CU_A3991 save of Lycerius. That is if a city produces 10 shields and +1 food, its shield/food box have an extra 10/1 items in them compared to CU_A3991. However all the units are where they were.

The game is at the original Warlord difficulty. I really wanted to make it Emperor, but decided that for comparison reasons (with people off this forum) we better stick with the original.

The production in the size 1 city of Mycenae has been changed from Engineer to Freight. Had I not changed that, the city would get a “disband the city” message. Since the city has half a dozen improvements in it, I did not want some one to lose all of those accidentally

When scoring this GOTM, pollution penalty will be calculated by hand and it will be -6 per tile instead of the usual -10. This is to prevent a negative score by people who just want a quick conquest and do not want to make any attempt cleaning up the world.

Typically in GOTMs replaying is not allowed. You get one shot at a game. However, since here we are starting in the middle of someone else’s game and there are likely going to be quite a few new GOTMers, we have decided to relax that rule. You may replay as many times as you wish. But you get to submit only one game. I should explain that replay means going back to the starting save and playing from there. Going back to some intermediary save is considered cheating. Reloading for a different battle outcome is also considered cheating.

Instead of the usual 3 submissions, submit the saves after 50 turns, 100 turns, and right before conquest. However, save every 2-3 turns and keep those saves on your computer. We may require you to turn in more saves to qualify for the results tally.