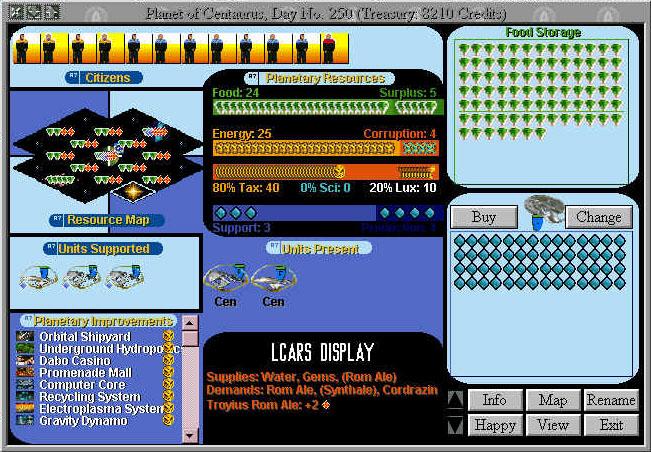 Were there any sounds you had never come across before? (Score: 1 )
Did you discover many units not used in any other scenarios? (Score: 1 )
Is the theme of the scenario completely novel? (Score: 1 )
Were complex events used to carry the story line or enhance the AI? (Score: 1 )
Did the author deal with all areas which could be modified? (Score: 0.5 )

Last
but not least, my final score playing the scenario in Captain (Prince)
level was 22% and I took two of the planets in the Gamma Quadrant. I
also played the scenario in Ensign (Chieftain) level and my score
inflated to 83% and I conquered the Dominion. My first game was only
15% (Commodore [King] Level) with a score of 190 points. Score really
is not relevant though, because the mission is to destroy the Dominion
(really tough) and stay alive, which is the point of the scenario, not
the score. I must say however, if anyone were to play it, they should
start at a much easier level probably Ensign or Commander. In fact, I
recommend that you DO NOT start at Commodore or higher. Try any other
lower level first. I say this because a substantial amount of "micro
management" is required for your planets (cities) in order to play a
decent game. I would also warn players that the Dominion will make you
cry when they attack because they will "Die hard" with a vengeance.
Never, and I repeat, never stop building units or you can just kiss it
goodbye. Oh, a strategy guide is available, but try it first and see if
YOU can beat the Dominion!