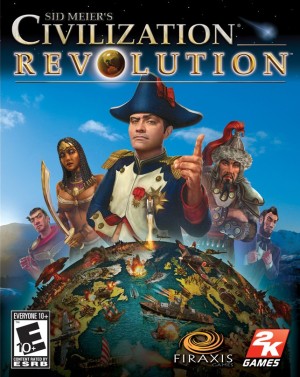 Since the game’s release, numerous reviews have praised CivRev for its intuitive controls, streamlined gameplay, and great visuals. While the game is definitely simpler than Civilization IV, key elements that contributed to the additive Civilization gameplay are still there. The result is a fast-paced and action-filled game that’s very easy for first time Civilization players to pick up and play. Veterans will also find that the series’ famous “just one more turn” addicting gameplay remains intact.

Civilization Revolution supports both single player and multiplayer. For single player, players can play on randomly generated maps with four AI opponents. There is also a “Game of the Week” feature in which everyone can play on the same map each week and compare their scores on the leaderboards. The game also includes several scenarios.

A typical CivRev game can last 3 to 4 hours, largely due to the streamlined gameplay, shorter tech tree, and smaller map. For example, the worker unit is eliminated. To build roads, now you simply open the city screen and spend gold to instantly construct roads between two cities. In addition, roads have unlimited movement in CivRev, but entering a city costs 1 movement point. Both changes helped reduce the amount of micromanagement.

Civilization Revolution contains 16 civilizations, each represented by a leader. Every civilization has special starting bonus and also era bonuses which they gain as the game progresses through the various eras. The era bonuses are cumulative.

Unlike Civ4, in which units have a single strength value, units have separate attack and defense values in Civilization Revolution.

Most battles in Civilization Revolution are fought on the army level. When you have three units of the same type in the same square, you can form an army which has the combined strength of the three units. When a unit has achieved three victories, it becomes a veteran unit. Winning more battles will promote the units to elite level which allows the unit to learn special abilities (promotions). When a unit wins combat against another unit with equal or higher strength, there is a chance a Great General unit will spawn. A Great General provides +50% bonus to all units in a stack.

Civilization Revolution introduces the new concept of naval support. When a naval unit is adjacent to a land tile, it can provide naval support to units fighting on that tile in the form of an attack bonus or defense bonus. The amount of bonus depends on the strength of the naval unit.

In addition to the familiar wonders of the world, Civilization Revolution introduces a new type of wonder-like structures called relics. They are scattered across the map and the first civilization that discovers a relic receives its benefits. It makes exploration more rewarding and important.

All the wonders except those related to the victory conditions (World Bank and United Nations) can be rush-built either by gold or Great Builder.

Six different types of Great People provide special abilities upon their appearance, and are generated by a civilization’s total culture output (as opposed to a city’s turn-by-turn collection of great people points as in Civ4). These powerful units can hurry production in a city, research a technology, or settle in a city, providing various per-turn benefits such as +50% gold production.

You can win a game in Civilization Revolution in four ways. The first way is domination victory, which is achieved by capturing all enemy capitals. This is different than Civ4 in which you need to have 2/3 of the world’s land and population.

The second way is economic victory, which requires accumulating 20,000 gold and also the World Bank wonder.

The third way is cultural victory, which requires a combination of 20 total cultural events: number of flipped cities, great people (settled in city), and wonders built. In addition, the United Nations wonder is required to complete the victory.

The last victory type is space race victory, in which you build a space ship composed of various parts. The first civilization whose spaceship reaches Alpha Centauri wins the space race.

It’s important to point out that Civilization Revolution is not intended to be a follow-up to Civilization IV. Some of the major features introduced in Civilization IV such as religions and civics are not included. The resources and diplomacy systems in CivRev are also much simpler, more comparable to those found in Civilization II. If you expect it to be like Civilization IV, you will be disappointed. However, if you treat it as a different Civ game, you will have lots of fun and find it a refreshing change.

For more detailed info on the game, please check out the CivRev Info Center and the various Civilopedia reference pages using the links at the left.

Please check out the marketplace for order links.