Who has been working on this article?

The sections below cover everything you need, or want to know about Civilization IV. Click on one to begin, or

use “CTRL-F” to search

Note: This article is best viewed under 1024×768 or higher resolutions. 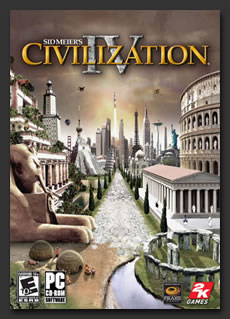 This information is meant to give anyone a deep, factual understanding of Sid Meier’s Civilization IV (the sequel

to
Sid Meier’s Civilization III) as well as Civilization IV: Warlords
(the first expansion pack of the base game). The article will keep up to the very last detail of information that is

currently available to us.

put into this article as one organized piece. This should make it very easy to find virtually everything you want to know,

without having to surf

through multiple places on the web to find what you need. You don’t have to be a
Civilization III veteran to understand what we are talking about here,

awards, and which is

the world over as being the greatest, and finest turn-based strategy game series on the planet!

The game has been released, but it does not mean that this article will not
be updated with more news as it comes (patches, expansions, etc)!
This information is up to date as of Monday, July 3rd, 2006, and up to the latest available bit of information.
As information changes, or is released, I will be updating this as soon as
possible so it evolves to be factual. I recommend that you check out the updates
(when they are posted), so that you stay informed, and up-to-date as well.
Checking the “Miscellaneous Information" section
occasionally can also give you a heads-up on some other things either in regards
to this article, or other information. From what we have gathered so far, as
well as the great reviews the game has been receiving, I believe we can all form
our own opinions of it.

This is the most detailed and extensive, most viewed, and also the most
updated place for all things Civilization IV from around the web.

Currently, there are a total of 360+ gathered game details, with nine

This is the section for looking up all the current new updates on the go
from Monday, July 3rd. They are not organized in any way, so it is highly
recommended that you read through past this section and take a more in-depth
look at the rest.

This is the first expansion to

Here we’ll look at the very basics of the game, from its creators and the design elements they implement, to what

Below is an exact quote of the official features of Civilization IV that the Publishers and Developers have released. Do not forget to go to Civ4.com
for much more information!!!

With over 6 million units sold and unprecedented critical acclaim from fans and press around the world, Sid Meier’s

play
and win, new tools to manage and expand your civilization, all-new easy to use mod capabilities and intense multiplayer

comes
to life like never before in a beautifully detailed, living 3D world that elevates the game-play experience to a whole new

has
already been heralded as one of the top games of 2005, and a must-have for gamers around the globe!

Perhaps this is the most important question to most people. When will the game actually be released?

This section will deal only with the Official System Requirements for the game, as well as the ESRB Rating.

The look and feel of a game are very important to most players; the description of these can be found here. For

Control is a very important aspect for any game. With Civ4’s new interface, ruling you empire just got a whole lot

To expand your empire, first you would need as much detail about the terrain as possible.

There are a lot of opportunities in the game to form allies, and that is necessary to fend off enemies.

Perhaps a significant component of good game-play is a good AI. The AI is much improved in the new game… 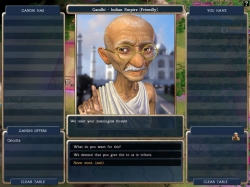 Above, the AI and Diplomacy virtually go hand in hand. Both are also improved… which means a much more

Controlling Your People… by Decree

All the power is in your hands. What you do with it can lead to your Empire’s victory or your utter demise. 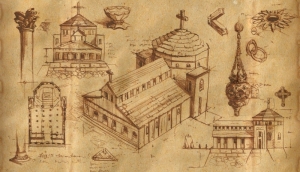 religions in the game are equal. However they also have an impact on diplomacy.
"It’s like culture without borders," as Jesse Smith Puts it.

The Influence of Great People

People also add a great deal of variety to the game. Some offer extremely great benefits as we’ll cover below…

Cities are like the many hearts of your Civilization. If you take care of them, they are bound to take care of

Strategy comes to play even more here… there are a total of 102 buildings, and each has its own benefits. It is up

to you to be the

Wonders of the World

Even greater buildings, however, are the ones which build up your civilization as a culture, and put it along other

It is not the technology that matters It is how well you use it.

There are many different types of units, and all have different abilities. On top of that, there are special

promotions as well. This makes

How will you wage war? What new systems are involved? This is the section for the warmonger.

Some people, of course, like to play with others online. How the multiplayer mode seems so far is promising.

People do not lie when they tell you some like to customize the game just as much, or even more so than to actually

Here, you will be able to see all that the game has to offer for the eye. Movies, screenshots, and more! For all

Screenshot section. For all videos, go to the

Some answers to your questions might get answered here, if you needed help. This section concerns the article

This is the place where all updates — past and present — are kept. Each update also has a link to the exact

information source; be it

screenshots, previews or other source links.

All of the following deserve to be credited with the provided information above.