Civilization IV is the latest installment in the award-winning Sid Meier’s Civilization series. The game is developed by Firaxis Games and is published by 2K Games on October 25, 2005. Firaxis began working on the title about two years ago. 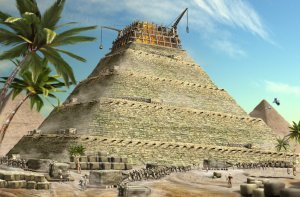 The most prominent change from previous civilization games is the graphics. The game world is now completely 3D. Rivers, resources, and terrain improvements are all animated, making the map come alive like never before. You will also be able to smoothly zoom in from a rotating global view all the way down to the city level, as well as change the camera angle to a Civ2 style isometric view or a Civ1 style top-down view. All city improvements and wonders are now directly visible on the map, so if you build the Pyramid, it will appear within that city’s radius. Fans who missed the Civ2 wonder movies will be happy to know that wonder movies are making a return in Civilization IV! There are about 45 movies total in Civ4.

Of course, graphics is not the only area that received an overhaul. Firaxis has built the game from the ground up and added lots of interesting new features to make the game even more fun to play. Below we will briefly discuss some of the key features:

Firaxis is replacing the unfun elements such as corruption, riots, and pollution in previous civ games with better systems. For example, instead of pollution, Civilization IV will have a city health system. Some city improvements reduce the health of city, while some city improvements increase the health. Food resources such as wheat and fish also increase the health of your cities, and they are tradable just like the luxury and strategic resources in Civilization III. Building the city near a source of fresh water will also improve your city health.

The fixed governments are now replaced by a much more flexible Civics system, somewhat similar to the social engineering system in Alpha Centauri. The new system allows you to customize your government with various civics options that are classified into five categories: Government, Legal, Labor, Economy, and Religion. There are five options in each category. Players are free to choose any combination of civics. Some of the known civics are Free Market, Environmentalism, Slavery, Serfdom, Free Speech, Conscription, Emancipation, and Nationhood. Civics options are unlocked through research.

Religion is a brand new feature for a Civilization game. The game has seven real world religions: Buddhism, Christianity, Judaism, Confucianism, Taoism, Islam, and Hinduism. The religions are associated with certain technologies and the first civilization to discover a technology attached with a religion founds the religion. Once found, the religions can spread slowly throughout the world from the holy cities. Players can make religions spread faster by building missionaries and send them to convert cities. All the religions are generic in abilities.

Religions impact the game in a few ways. At the city level, they can influence your citizens’ happiness by allowing you to build religion-specific buildings such as temples, monasteries, and cathedrals. In diplomacy, civilizations with the same religions can get along better and sometimes a computer player may ask you to switch to his or her religion. If you control the holy city of your state religion, you will gain line of sight in all cities with your religion. The religious civics will also affect your cities in different ways, depending on your choice.

Another major Civilization 4 feature is the RPG style unit promotions. In previous civ games, units have only a few levels: conscript, regular, veteran, and elite. Now in Civ4, there are more than 40 promotions you can give to your units as they gain experience, enabling you to customize your units to make them more unique and more powerful. Some of the promotions give your units a strength bonus, some give your units a bonus against a certain unit type, some make your units better on certain terrain types, while some give your units special abilities such as use enemy roads, faster healing, amphibious attack, and city raider.

Civ-specific units and animated leaderheads are still in Civ4. In addition, some civilizations now have two leaders, each has different traits and distinct personality. For example, if you play France, you can choose between Louis XIV or Napoleon. Playing as Louis XIV gives you free culture while playing as Napoleon gives you military bonus. Units now also carry unique civilization banner to make them easier to identify on the map. There are a total of 18 civilizations and 26 leaders in Civilization IV.

The Great Leader concept in Civ3 is replaced by a more elaborate Great People system. There will be five categories: Great Artist, Great Merchant, Great Prophet, Great Engineer, and Great Scientist. Each great people type will have three to four benefits such as culture boost, academy construction, free tech, wonder construction, and trade mission. You will also be able to use a group of Great People to start a golden age and multiple golden ages are now possible. The Great People are automatically generated by cities and the type generated depends on the structures in the city.

Civilization IV will be the most customizable version of Civ yet! There are four levels of customization. In the first and easiest level, players can use the built-in World Builder to create new custom maps to play in single player and multiplayer games. In the second level, players can edit the game’s XML data files using notepad or a XML editor to change the game parameters — nothing in the game is hard-coded. In the third level, players can edit the game’s python scripts to change map generation, the interface, game events, etc. Finally, at the fourth level, players with programming experience can even change the AI and all the game rules using the Civ4 Game/AI SDK (Software Developers Kit). In other words, you can pretty much change everything you want and even build a game based loosely on Civilization.

Multiplayer has not been a strong point for Civilization games and Firaxis hopes to change that with Civilization IV. In addition to the standard internet, Hot Seat, and LAN multiplayer modes, Civ IV will be playable by email (PBEM) or on a persistent turn-based server (named Pitboss) out of the box. There is also a new Team Play option which allows players to form alliances with each other in multiplayer games. Players on the same team will pool their accomplishments together, join forces in combat and share all information, even line of sight, benefits of wonders, research, unit trading, and sharing of territory. Firaxis has been playing Civ4 multiplayer for well over a year.

There are lots of other interesting additions and changes in Civilization IV: the tech tree is no longer divided into arbitrary eras and it’s possible to reach a technology, such as Gunpowder, via a different path; barbarians can capture and operate cities and there are wandering wild animals on the map, making exploration more dangerous; a city’s culture level now affects its defensive value; the ability to broker peace in diplomacy… etc. They are too much to mention here. For a comprehensive collection of all known Civilization IV information, we invite you to visit the Civilization IV Info Center section.

As you can see from this overview, there are lots of exciting new features to look forward to in Civilization IV. Be sure to check back often for our complete coverage of the game, before and after release!

The Civ4 demo is 314.27 MB and it allows you to play 100 turns, as either: India, Rome, Inca, or Greece. Another limitation is the tech tree ends at Divine Right.