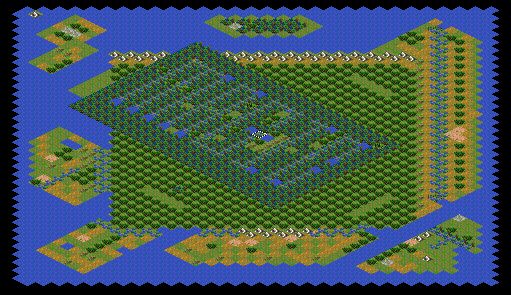 Game Settings:
Civilization: Russians (1 settler)
Map: Artificial 30×70, flat, seed 57; 7 civ’s. Rivals are known. Mainly a single continent with start position in middle of large area of marsh and woods. Chinese are to East, Indians to the south, Spanish to the south-west, Germans to the west. The Japanese and the English are on islands. Huts on forest and mountains have been removed. The many local huts
are visible to player once game is opened;
Difficulty: Emperor
Barbarians: he most severe level (+50) – many players may not be familiar with this – see below
Restarts: Off
Victory by spaceship or conquest
Observation: Inspired by GotM 121 “Sherwood Forest” (set by Magic). This was one of the games in my first year here, and I think it was the most talked about and enjoyed game of 2011.
1. I have aimed to make this one less time-consuming by using
a) a smaller map
b) better terrain i.e the starting area is largely marsh rather than forest as in GotM 121, and there is plenty of irrigation possible.
2. Barbarians are the level worse than barbarian hordes, sometimes called barbarian wrath. References say villages and pirates are the same as with the raging
hordes setting. Rebel bands, if and when they occur, are much larger, however, being
75 to 100 units, in the usual types. (Horsemen and chariots before gunpowder, then elephants and archers until industrialization etc.) Leaders are worth 200g if captured.
Also Barbarian cities and units are democratic and so cannot be bribed;

Note:
The barbarian factor and the many huts available to the player mean this is not going to be any more “fair” than several other recent games.
Players who prefer to explore will not be at a big disadvantage if they do not look at the .jpg (world map) file.