As the scenario tells you:

Uther
Pendragon is dead. His heir, Mordred, is still a baby. Arthur must
return home to save his future king. With the death of Uther the old
High Kingship of Britain is dissolved. Silura, Powys, Gwent, Eluned and
Dumnonia are now seperate factions rather than one opposing the saxons.
King Gundleus of Siluria has declared war on Gwent and Powys. King
Edling of Eluned has declared war on Dumnonina. We must stop this civil
war before the great saxon army arrives!

You play
as Arthur of the Dumnonians circa 450 A.D. right after the Romans have
abandoned Briton. The Dumnonians are one of the tribes of Briton and
you control the area known as Wales today. There are several other
local tribes like the Benoic and either allied with them or by yourself
you have to fight the invading Aenglish and Saxons. The scenario comes
in five parts.

Were you able to finish in a reasonable amount of turns? (Score: 1 )

There are about a 100 to 150 turns per chapter and every chapter
ends at a particular date. So this brings the total number of turns to
about 600. This isn’t some scenario you can play in one or even three
sittings. However, its nicely broken up into segments so think of it as
five scenarios that play sequentially. The 5 chapters are:

Part 1 – You get to familiarize yourself with the scenario and
fight mostly in northern France in aid of your allies the Benoic (led
by Lancelot).

Part 2 – Involves the search for the caldron of Merlin so his powers can be activated.

Part 3 – Lancelot revolts and you have to destroy the Benoics.

Part 4 – The invasion forces of the Aeglish and Saxons begins to
reach your territory while you go on several quests to find a way to
stop them.

Part 5 – Modred grows up and there is a final battle with loyalist
forces even whilst the invasion of Briton continues unabated.

Did the scenario avoid being tedious or repetitive? (Score: 0.5 )

Battles tended to get repetitive and in particular, the AI wolf
units which are actually air units would repeatedly cause a message
saying that they are attacking – which originally is the air attack
message. I did not enjoy pressing the OK a dozen times each turn for
the entire second half the scenario.

Did the scenario capture the essence of what it was portraying? (Score: 1 )

The legend of Arthur is very nicely meshed with what is know about the situation in Briton during the period.

Was the choice of and interaction between races appropriate? (Score: 1 )

Good mix of tribes. There are two invading tribes, one neutral
tribe the Franks who play a minor but balancing role in the scheme of
things and three other existing powers in Briton.

Did you enjoy playing the scenario? (Score: 1 )

Yes this was one of Mr. Temba’s better creations. I liked it much better than Charlemagne and as much as Under Dark. 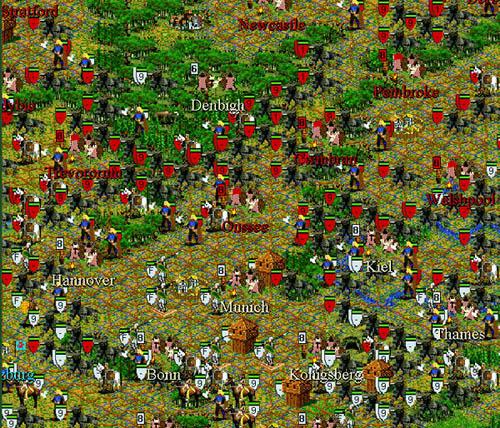 These are the ever growing Aenglish and Saxon hordes you have to fend off.

(note that Kiel and Konigsberg have move to England)

Were the majority of units changed from the default Civ2 units? (Score: 1 )

All units were modified and looked correct for the period.

Were all of the sounds appropriate for the units in the scenario? (Score: 0.5 )

Units slots were arranged so that all sounds were appropriate. However, some of the sounds were simply the default civ2 sounds.

You have some hero units which are more powerful but not
invincible. I lost most of the hero units I received in each chapter
except for Arthur himself. I would have preferred some kind of
scissors-paper-stone battle system but it seems that concentration of
raw numbers is more important in Enemy of God.

Were there innovative combinations of special unit abilities? (Score: 1 )

Yes. I particularly liked the birdmen which were a combination of a
paratrooper and explorer. Took me a while to figure out how to use them
properly but once I did, they did wonders. Another unit was cleverly
used to complete an otherwise very very expensive wonder.

Were Barbarian units appropriate when they appeared?(Score: 1)

Excellent use of Barbarians. In the tradition of other Temba
scenarios, local barbarians are triggered repeatedly by events while
other barbarians come out of Barbarian cities and typically protect
items you are searching for.

Were advances properly related to new units and obsolescence? (Score: 0.5 )

Except for the A-bomb type unit towards the end, I didn’t get any
new units other than unique units. I would have liked to have more
types of units as the game progressed but it seems the author was
intending to let the scenario revolve around the hero figures.

There was no research and you received new techs via events after
completing your quests or when certain historical events occurred.
Generally the techs were distributed such that each tribe had its
unique units.

Were non-event messages amended to suit the scenario ? (Score: 1 )

I didn’t notice any inappropriate messages. For example, When your
cities reach their size limit, the standard aqueduct message has been
modified to tell you the Romans took all knowledge about building
aqueducts with them.

Was the Civilopedia properly updated? (Score: 1 )

The pedia had fewer entries than the typical scenario because many
wonders, improvements and units were not available. However for those
entries which were present, the pedia was well updated as you can tell
from this example of the ‘Glory of Arthur’ Wonder. 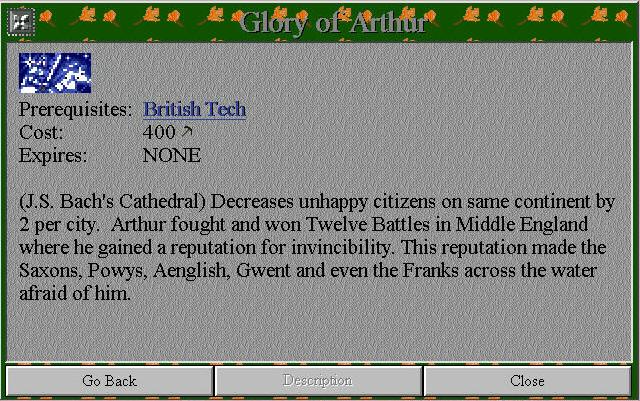 Detailed explanations of each wonder and improvement are provided

Were there dysfunctional improvements or useless technologies? (Score: 0 )

You can only build two improvement for most of the game, one is
harbor and the other the sacred grove. This latter is a happiness
improvement but you never need it as your citizens are never unhappy
even at deity level (since all research allocations can be given to
luxury). There are several other city improvements but they are already
there at the start of the game and can never be built.

Were you impressed by the Map in general? (Score: 1 )

The map covers Great Britain and a bit of Ireland and France. Its
been stretched left to right to increase the playing area while
maintaining access to the coast. A good idea compared to using a
proportioned map. (I’ve not included a picture since much of the map is
hidden at the start waiting for your exploration)

Was terrain properly adjusted to fit the scenario? (Score: 0.5 )

Pretty standard terrain. Nothing anachronistic but not particularly outstanding wither.

Was attention given to geography and historical details? (Score: 1 )

There was definitely a lot of research done and the author managed
to weave much of this into messages and events. I am not that familiar
with the period but I doubt if anyone could invent all the concepts and
terms used, like in this extract from the events file.

The High Council of Britian convenes for the last
time. Many new items are being discussed, but the leaders of Elened and
Siluria have not come. Two new saxon chiefs, Aelle and Cerdic have
landed, displacing the old king Aesc. From across the water british
refugees in Britannia are being attacked by Clovis, King of the Franks.
The council decides that the future of Britians is Dumnonias hands. The
new King, Mordred ap Mordred ap Uther ap Vortigern is still too young
to rule. So the men of the high council summon the best warrior in
Britian to fight for him. Arthur will come home.

Were you happy with the city, fortress, terrain improvement graphics? (Score: 1 )

Cities were appropriately adjusted. Your own cities are the
standard medieval style but the invaders and barbarians have
encampments and some tribes have posts instead of flags. 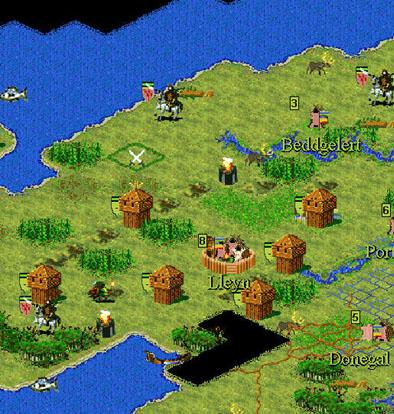 A piece of land owned by the barbarians whic shows many of the changes done to the terrain and cities.


Were city names and the placement of cities correct? (Score: 0 )

Your own cities are appropriately named but when you look at the AI
races, many cities from mainland Europe begin to appear in England. I
might be able to rationalize that some of the European tribes decided
to found their cities in the British Isles instead but how would you
explain Chinese cities being located in England?

Did you find the documentation adequate? (Score: 1 )
Yes
there was a detailed readme and even a history file which explains the
situation at the time in great detail. The following is an example from
the history.txt.

AD 450 – Adventus Saxonum. The coming of the Saxons. Hengest (a
Saxon chief) arrived on the shore of Britian with "3 keels" of Saxon
warriors. He is welcomed by Vortigern. During the next years there was
increasing Saxon settlement in Britian. Hengest invitied his son Octha
from Germany to bring 16 keels of warriors who occupied the northern
lands and defeated the Picts. The Picts were never heard from again.
After that the Saxons become restless. Raids on British people became
more and more frequent.

Was the events file sufficient for the needs of the scenario? (Score: 1 )
Events were excellent. In fact, I think one of the main reasons why the
scenario is broken into five parts so that such a huge number of events
could be included.

Were you happy with the improvement and wonder icons? (Score: 1 )
Yes all the icons were changed to make them fit with 400 A.D. 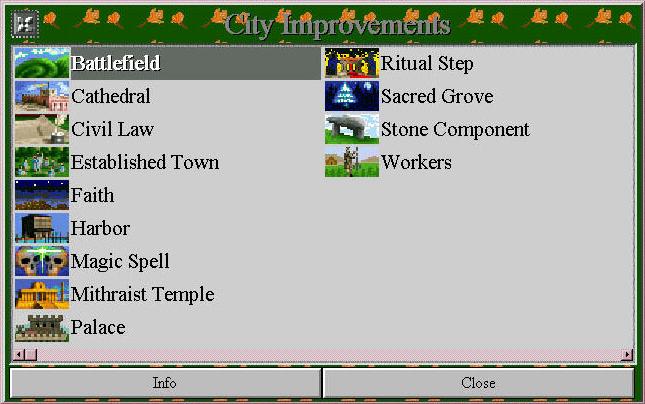 
Did you find any very apparent errors? (Score: 1 )

This is version 2.4 so most of the wrinkles have been ironed out.

Do you think a lot of effort was put into doing this scenario? (Score: 1 )

Without a doubt this has been a monumental piece of work.

Were there any sounds you had never come across before? (Score: 1 )

There are various sounds like barking dogs and a guy who shouts "You’re going down!" much like in a WWF match.

Did you discover many units not used in any other scenarios? (Score: 1 )

Some such as the African Mercenaries were created by Mr. Temba
himself while others were made by Harlan Thompson and Alex Moor. As the
scenario is not new, many units probably appear common by now but I
believe at the time they were relatively unique.

Is the theme of the scenario completely novel? (Score: 0.5 )

No. This is one of the more common medieval fantasy settings.

Were complex events used to carry the story line or enhance the AI? (Score: 1 )

This part was brilliantly done. You have to search for things like
unicorns and dragons and the storyline of Arthur, Merlin, Lancelot and
Adventus Saxonum are skillfully broughtforth by the events. Also, the
algorithm for creating AI and barbarian units was well thought out.

Did the author deal with all areas which could be modified? (Score: 0 )

Sadly no. Although I have enjoyed the scenario as it is, I cannot
help but think that too many parts of the traditional civ game such as
research, city improvements and unit obsolescence have been left out.

If you are interested in the Arthurian Legend or British History and are willing to invest
the time to play a long challenging scenario – this scenario’s for you.
Also, many civ players (not me) like to bypass research and the micro
management of cities. If you are one of them, this scenario is for you.

For a full History Perspective of this scenario, visit this website http://www.vii.com/~cda/atlas/