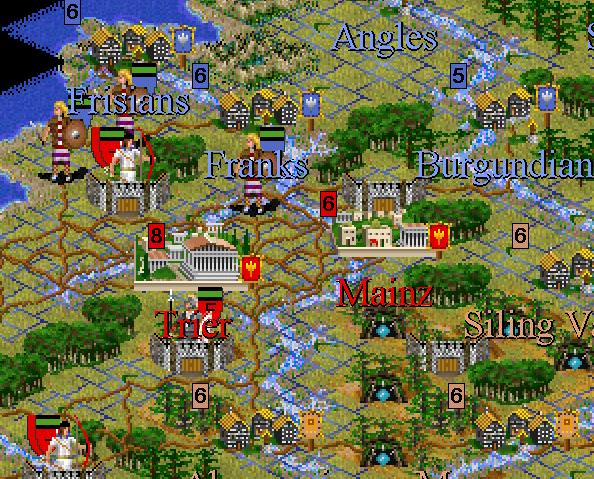 Were you able to finish in a reasonable amount of turns? (Score: 1 )
Yes, the game is very fluid, with so many horse soldiers about, as well as roads and rivers, things move rather quickly.

Did the scenario avoid being tedious or repetitive? (Score: 0.5 )
To an extent. This is a pure battle scenario, you have what you need at
start, so it can become much of the same as it goes on, but this
scenario would be ideal for multi-player.

Did the scenario capture the essence of what it was portraying? (Score: 1 )
Absolutely. As the Romans, you are inundated by hordes of barbarians
intent on conquest, and your subpar military is severely put to the
test trying to stop them. The events include major barbarian invasions
in Spain and Africa, and can be a shock to the unprepared.

Were you impressed with the overall sound effects? (Score: 0.5 )
Yes, the sounds are all tailored to the units, and blend in nicely.

Was the choice of and interaction between races appropriate? (Score: 1 )
The choices are very good here, the author logically groups several
kinds of Goths (Visigoths, OstroGoths) and German tribes into the
Franks, the two Roman empires and Persia fit nicely, and Attilla and
his huns are a nice bunch of marauders lurking about.

Did you enjoy playing the scenario? (Score: 0.5 )
I could
give a full point here, as the fall of the western empire is a favorite
time period, but since this scenario is almost all fighting and little
building and research, I’ll go for only 0.5 here.

Were the majority of units changed from the default Civ2 units? (Score: 1 )
All the units are changed from civ-2 default units.

Did you discover any inappropriate unit sounds? (Score: 0.5 )
All sounds are appropriate for this scenario

Was the scenario free of ‘unbalanced’ units? (Score: 0.5 )
There are some "leader" units which are quite powerful, and a special
wall unit, but all work within the context of the scenario.

Were there innovative combinations of special unit abilities? (Score: 0.5 )
All units capabilities are pretty standard here, nothing jumps up as unique.

Were Barbarian units appropriate when they appeared.(Score: 1)
This whole scenario is about barbarians! But there are also random AI Barbarians in addition to the tribal types.

Was the progression of advance to advance done properly? (Score: 0.5 )
No problems here, all works just fine.

Were advances properly related to new units and obsolescence? (Score: 0.5 )
There is little to research, and nothing really goes obsolete, but for the time frame depicted, it works well.

Was the tech tree of a high level of complexity? (Score: 0.5 )
It is satisfactory for this game, and slightly different for only the Eastern Romans.

Were non-event messages amended to suit the scenario ? (Score: 0.5 )
All messages fit the atmosphere of the scenario.

Was the civilpedia properly updated? (Score: 1 )
All units, civic improvements and wonders are properly explained.

Were there dysfunctional improvements or useless technologies? (Score: 0.5 )
All worked as it should, the game functions smoothly.

Were you impressed by the Map in general? (Score: 1 )
Yes, the map includes most of Europe, North Africa, as well as the Russian steppes and Persia.
The cities chosen were logical and well placed, with minor barbarians named as cities in the barbarian zones, a nice touch.

Was terrain properly adjusted to fit the scenario? (Score: 1 )
The terrain is correct for the period depicted, all these areas played a part in this story.

Was attention given to geography and historical details? (Score: 1 )
Yes, there are no poorly placed or historically inaccurate cities.

Were you happy with the city, fortress, terrain improvement graphics? (Score: 1 )
Yes, the Romans have a nice ancient look, the Persians an exotic look,
the huns have a tent-like city graphic, and the western Barbarian an
early dark age look.

Were city names and the placement of cities correct? (Score: 1 )
As stated earlier, all cities are correct for this period, and good selections were made for each one.

Were there innovations used in relation to Terrain? (Score: 1 )
The best one I say was the use of air bases, here they look like
Horses, and act as a speed boost in Hunnish territory, which makes them
very fluid and dangerous to attack.

Did you find the documentation adequate? (Score: 0.5 )
The readme includes a short description of each tribe, all units and
wonders are examined, but little historical commentary is included.

Was the events file sufficient for the needs of the scenario? (Score: 0.5 )
Events were used to trigger major barbarian invasions, random Barbarians and some naval units for city capture.

Were you happy with the improvement and wonder icons? (Score: 0.5 )
All fit the time period and are pleasing to the eye.

Do you think a lot of effort was put into doing this scenario? (Score: 1 )
For a battle scenario, and a subject where numbers are very hard to
estimate, the author has done a very good job portraying the feel of
the period and the forces involved, far better then more complicated
scenarios I have seen. 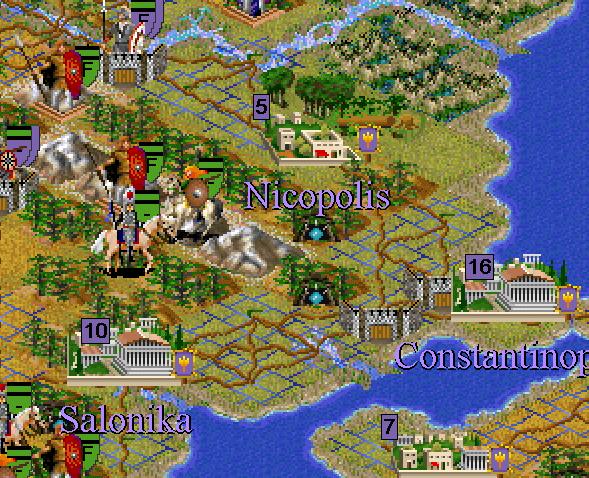 Were there any sounds you had never come across before? (Score: 0.5 )
None come to mind, but there may have been some, but all sounds match the units correctly, but leaders lack sound.

Did you discover many units not used in any other scenarios? (Score: 1 )
All the units here were created for this scenario, and are quite beautiful, it’s the real strength of this scenario.

Is the theme of the scenario completely novel? (Score: 0.5 )
This period has been heavily depicted, both more simplistically and in
more complex fashion, but never more visually pleasing, nor smoother or
in a more enjoyable way. This scenario is fun to play.

Were complex events used to carry the story line or enhance the AI? (Score: 0.5 )
No, the events were used to fit the theme, barbarian invasions and reinforcements and such.

Did the author deal with all areas which could be modified? (Score: 0.5 )
A few small things could have been modified, but are hardly important, it works as intended.

Any other innovations worth mentioning? (Score: 0.5)
I
like the idea of city walls used to only preserve population, this was
not a time of great seiges, but of plundering and sacking, and you will
do plenty of both.

This
is a fine battle scenario, by one of the best makers of units and
terrain in the business. Playing it as either Roman tribe, one gets the
feeling of the campaign, the frustration the Romans felt as the endless
barbarian hordes destroyed the great civilization they once knew. As
the Barbarians, you get to rip up the arrogant Romans, sack their
cities and forge the kingdoms that will one day be modern Europe. Those
men forged a continent, and you can follow in their footsteps here. A
very fine, beautiful to look at and fun to play scenario by a fine
author, it’s highly recommended for those who love the sting of battle.
If your more an empire builder, look elsewhere, the name of the game is
war here.