Were you able to finish in a reasonable amount of turns? (Score: 1.0 )
Standard game length which is good. You don’t have to slug it out to
the last since the Space race will determine the winner long before
anyone can take over the planet entirely.

Did the scenario avoid being tedious or repetitive? (Score: 1.0 )
During the initial phase things move rather slowly and you can only
build two units for the longest time. Soon new units and improvements
begin to appear at a regular pace and keeps you waiting for more.

Did the scenario capture the essence of what it was portraying? (Score: 1.0 )
In my opinion, it does.

Was the choice of and interaction between races appropriate? (Score: 0.5 )
I think more could have been done to give each race a more distinct
identity. Each faction is very similar and is only differentiated by
their starting position and the wonder that start off with. For
instance, the Academ’s start off with ‘the Great Library’ etc. The
leader’s section in the rules.txt was untouched and this means that
each race had the same specifications for aggressiveness, expansion and
military tendencies.

Did you enjoy playing the scenario? (Score: 1.0 )
The
best Sci-fi scenarios I have every played that is not linked to
existing media or books. Martian Dawn’s most striking characteristic is
that at its core, it is very similar to a standard game of Civ II. This
is something you so seldom find nowadays and was totally refreshing for
me. 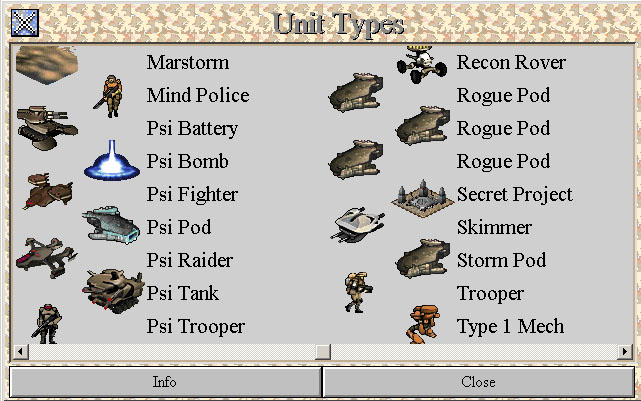 Were all of the sounds appropriate for the units in the scenario? (Score: 1.0 )
All sounds were changed from the default version.

Was the scenario free of ‘unbalanced’ units? (Score: 1.0 )
With clearly defined roles, the match off between various types of
units works well and you cannot get away with not building a particular
type of unit. This is one of the hallmarks of a well-balanced unit
scheme. The only imperfection was the low cost effectiveness of cruise
missiles. I only used it once and the AI wisely chose never to use them.

Were there innovative combinations of special unit abilities? (Score: 1.0 )
Besides the walkers mentioned above, I found two examples of great unit
ability characteristics. One were ultra troopers which could paradrop
100 tiles – roughly equivalent to SMAC’s orbital diving units. Another
was the para capable nukes which puts you on equal footing with the AI
which can move nukes to any city instantly.

Were Barbarian units appropriate when they appeared?(Score: 0.5 )
The full barbarian sequence was enabled. One problem I found was that
the later Barbarian units were weaker than the earlier ones.

Was the tech tree of a high level of complexity? (Score: 1.0 )
This was a full tech-tree at the regular research rate. The section
matching the ‘industrial era’ of the standard game was cleverly
packaged to portray a transformation of martian society from machine to
mind based technologies.

Were non-event messages amended to suit the scenario ? (Score: 1.0 )
All pop-ups were meticulously updated to match the Martian theme. My
only gripe was that there was no para jumping message and I never knew
I had para-jumpers till they were used against me. It was probably used
for some other purpose.

Was the civilopedia properly updated? (Score: 0.5 )
Inappropriate words were changed in the pedia but there was no
explanation whatsoever for any of the terms. For instance the wonder
Cornucopia Device has this entry "Pays the maintenance for all colony
improvements which ordinarily cost 1 MegaBuck per turn.  Colony
improvements requiring more than 1 MegaBuck per turn maintenance are
not affected."

Were there dysfunctional improvements or useless technologies? (Score: 0.0 )
There were dozens of advances which had absolutely no function,
especially at the beginning while later on advances could give you more
than one new capability. This caused some confusion when it came to
choosing your next advance. I think their purpose was to slow you down
at the beginning but it would have been much better to have just given
them to the races as simply having more techs already slows down your
rate of research. 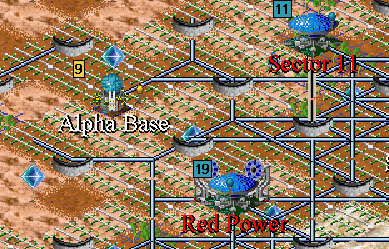 Were you impressed by the Map in general? (Score: 0.5 )
Although distinct regions and a blending of terrains gives a very
impressive map visually, the actual attributes of the terrain types
leaves a little to be desired. I found that terrain was far too
uniform. All major terrain types could be irrigated and this resulted
in water becoming far too plentiful and several cities had surplus food
of over twenty in the later stages. On the other hand, only one rare
type of terrain could be mined for extra shields and in general cities
of the same size had the same production capability. Money was quite
easy to come by as well as all terrain produced it. While the scenario
functioned perfectly under this monotonous terrain scheme, it could
have been improved upon with the introduction of more terrain variety
in terms of resources.

Was terrain properly adjusted to fit the scenario? (Score: 1.0 )
Was attention given to geography and historical details? (Score: 1.0 )
The Mars landscape is quite well depicted with permafrost, dry
riverbeds and volcanic plains as the main colonizable terrains. Other
terrain types are cratered, canyon and ice cap. The author has aptly
chosen to make water the primary survival commodity and this forces you
to seek out areas with underground water before developing colonies. As
fusion power is prevalent by 2300, water as it turns out becomes a
source of energy as well as food. Storm basins were used to get pass
the fact that there were no oceans.

Were you happy with the city, fortress, terrain improvement graphics? (Score: 0.5 )
These were for the most part quite appropriate and the author made full
use of the different city eras while most would have just tried bypass
the default changes in city graphics. Improvements were nice,
especially the mines and soy-farms.  There was one major irritating
thing. All the city names were red making it very difficult to tell the
extent of the empires on the small map. Also at times it became
difficult to tell who controlled a city especially with the two yellow
races which both had white city names.

Were there innovations used in relation to Terrain? (Score: 1.0 )
One innovation worth mentioning was the use of single square rivers as
sources of underground water, what you need to begin irrigation.

Was the events file sufficient for the needs of the scenario? (Score: 0.5 )
Although the existing pop-up messages were adequate to carry the
storyline, they were few and far between and more of these could be
added to spice up the scenario given the amount of unutilised space in
the event file.

Were you happy with the improvement and wonder icons? (Score: 1.0 )
Good choice of icons for both improvements and wonders.

Did you like the changes to the player interface? (Score: 0.5 )
The standard interphase was changed to a reddish brown scheme in line
with the theme. I didn’t find it particularly striking it but it wasn’t
ugly either.

Did you find any very apparent errors? (Score: 1.0 )
Do you think a lot of effort was put into doing this scenario? (Score: 1.0 )
I couldn’t find a single obvious error. I believe the scenario was
subject to meticulous checking for text that is out of context. The
sheer volume of sounds (55 sound files) is testament to the work put in.

Were there any sounds you had never come across before? (Score: 1.0 )
Most sound effects were very well chosen and this was instrumental in
making the scenario special. No credit is given to third parties for
the sounds and I have not come across many of them so I assume they are
original.

Did you discover many units not used in any other scenarios? (Score: 0.0 )
Various scenarios and authors were credited with the original art.

Is the theme of the scenario completely novel? (Score: 1.0 )
Were complex events used to carry the story line or enhance the AI? (Score: 0.5 )
Although not a new theme, there being a Mars scenario even in the FW
pack, the scenario is original in the sense of how the storyline
develops. The events were implemented in a fashion which did not
disrupt the natural evolution of a standard Civ2 game. One important
turning point hinges on the discovery of the abandoned research
facility and this ushers in the Martian equivalent of the ‘industrial’
era and triggers the entire sequence leading to the space race. This
was very well done and explained the story of why the original Martians
died out. Having said that, I wouldn’t describe the events as complex.

Did the author deal with all areas which could be modified? (Score: 1.0 )
Although a plain vanilla scenario with nothing innovative in terms of
advanced techniques, each standard aspect of scenario making was dealt
with and modified accordingly. There were no glaring omissions

On balance, I would say a very good first effort for Mr. Ball. I played
it three times myself which is a great deal for someone who typically
plays for 10 turns and then gives up. As mentioned earlier, one of the
main attractions is that the scenario plays like a regular game. The AI
behaves very well under these parameters and gives you a very
challenging game. I played on King level and only managed to win on my
third try. Despite being executed flawlessly, Martian Dawn still needs
a bit of extra polish. There is still plenty of event space and over a
dozen empty unit slots. I’m sure if there is a future version the
scenario can make it to the ranks of one of the All Time Greats.