This is basically a Battle for the Atlantic scenario where you play only as the Germans (under Admiral Raedar). You try to kill as many enemy ships as you can while preserving your own limited navy. Only sea and air units are involved and the scenario concentrates on mostly on fighting.

Let me start by warning you that this is going to be a very long review. I must say I am not a ‘war enthusiast’ and my review encompasses many dimensions of Civ2 and goes beyond the scope of the typical ‘war enthusiast’ players. Quite a few people are very impressed by the Cruel Sea but unfortunately I don’t share all their sentiments, just some of them – so I’ve gone to great lengths to explain my score.

Were you able to finish in a reasonable amount of turns? (Score: 1 )
There scenario last of about 50 turns, each a month, lasting from late 1940 to mid 1944. Quite a nice time frame and a reasonable number of turns considering how long each turn lasted.

Did the scenario avoid being tedious or repetitive? (Score: 0 )

Most of the turns were very repetitive (more on this below).

Did the scenario capture the essence of what it was portraying? (Score: 1 )
I was quite happy with the basic premise of the scenario. The effort to confine the entire scenario to a mega naval conflict was commendable.

Was the choice of and interaction between races appropriate? (Score: 1 )
The attitudes of the powers were handled nicely. The beginning of Russian/German hostilities is timed perfectly but the German declaration of War after Pearl Harbour is one turn late. This cost me two Bismark Battleships and several escourts because I thought that the US wouldn’t attack until I attacked first during that one twilight turn.

Did you enjoy playing the scenario? (Score: 0 )
Well I must say that although the scoring system is an innovative way of providing an objective to the player, I feel that it spoils the entire game. To summarise, you get points when you sink ships and you lose (a lot of) points when your own ships are sunk.

This forced my U-boats to race out of port, kill a few ships and then return all in the same turn. I ended up using my Ju-88 planes to attack shipping more than my U-boats since they were practically invulnerable for most of the game and you don’t lose any points if they do get shot down. I ended the game with over 60 U-boats and a half a dozen capital ships all sitting idly in port while a constantly replenished fleet of bombers had a never ending picnic of tankers and freighters.

I understand the rationale for the point penalty system as Germany’s naval resources were scarce but the situation would have been better portrayed by using pollution to simulate bomb damage and wartime shortages (The Allies will of course have pollution free factories or something) and have points only for killing shipping, not surface combatants. I suggest one point each for sinking freighters, tankers, liberty ships etc. then you can forget about the complicated MSWorks spreadsheet that is included (but doesn’t work on my Excel).

After all, the goal should be to reduce enemy shipping and if you waste most of your fleet but destroy enough shipping, you should still have achieved your objective – to starve Great Britain out of the war. If you kill off all the enemy warships but all the convoys ge through, it wouldn’t help.

Were the majority of units changed from the default Civ2 units? (Score: 1 )
All units were changed to WWII era naval and naval-aviation units. Good attention was given to representing the full range of capital ships available to the Kriegsmarine and Allied Forces.

Were all of the sounds appropriate for the units in the scenario? (Score: 0 )
You are supposed to turn off your speakers – which is really a pity as it is an all naval and air affair. The author had only to replace the jet sounds with the piston plane sounds and apply the standard navbattle sound to the spare and extra units to give the scenario a decent sound ability. Merely sixty seconds of work but instead the author had chosen to continue to disregard sounds as in all his other scenarios.

Was the scenario free of ‘unbalanced’ units? (Score: 0 )

I feel that the balance of units in the entire scenario was wrong. Besides the problem of not having different speeds (movement allowances) for destoyers, cruisers and battleships, above all I felt that submarines should have been much slower on a relative basis. In any case, none of them should move more than a speed of 5. Instead, all move at roughly the same speed, 10 to 12 tiles per turn. Given the number of Allied ships and this movement allowance, they practically sweep the entire map on every turn. There were not only too many allied ships but also too many allied ships capable of seeing subs – including the King George V Battleship? Also, almost all ships can see 2 spaces – remember that subs are not invisible when they move or fight. As a result, I didn’t get a single blockade runner back to an Axis port and no U-boat that went south of Iceland ever returned to base.

I also do not agree with the seeding of invisible mines everywhere. Three of my very expensive condors ‘flew’ into hidden minefields and were destroyed. This completely destroyed any air recon role they might have had.

In WWII, three battlecruisers made a successful dash across the English Channel but in the scenario, the channel is dead to both the Allies and Axis because of the visible invincible mines. Another problem was when mines were returned after the treaty with Russia was broken. Disbandening each mine would yield atleast a cruiser. Also, British light cruisers for some reason would continually suicide themselves against these mines.

Were there innovative combinations of special unit abilities? (Score: 1 )
Mostly standard units. The Hudson and sword fish were examples of plane with the submarine flag, simulating a maritime patrol plane. The most innovative feature was the training range which helps you make your ships veteran. As each ship is destroyed, a new one is created via events.

Any other unit related problems (like shield placement)? (Score: 0.5 )
I think the bribe unit ability of the sabatuers should have been disabled together with the steal tech and incite revolt features. In my game I spent 3800 gold bribing a King George V battleship and then used it to destroy a sistership. I could have probably bribed the invincible mines if I had tried.

Were advances properly related to new units and obsolescence? (Score: 0.5 )

A few advances led to new units but all of them were well choosen and carefully researched. The obsolecence of the German’s heavy surface combatants was well ochestrated too – but via events.

Was the tech tree of a high level of complexity? (Score: 0.5 )
A simple tree with about five techs to research before the scenario ends. At the Diety level which I played(no recommended level specified), I couldn’t even reach Elektro Boats. Maximum research was ten turns on any setting. I would have preferred a discovery every six turns or so.

Were non-event messages amended to suit the scenario ? (Score: 1 )
Yes. This was quite well done. For instance the veteran message is "Your X has completed its training." and if a plane crashes from lack of fuel you get a "rescue crews will be dispatched to look for survivors" message.

Was the civilopedia properly updated? (Score: 1 )
No complaints. Here is an example:

The Lend Lease program was one of the most generous acts in modern history. Through it the United States donated vast quantities of war materials to countries fighting the Axis. – Provides Hydro power to every city on every continent..

Were there dysfunctional improvements or useless technologies? (Score: 0.5 )
I was not happy to discover that the Walter Engine Tech served no purpose at all other than as a pre-requisite to Elekto Boats. Also there were other mysterious messages like "Vichy France discovers mobile warfare" and "Neutrals discover flight".

Were you impressed by the Map in general? (Score: 1 )
Very nicely done map – easily the best part of the scenario. I think it was just about the right scale for the purposes of the scenario nad stretched to part of the South Atlantic and included the Med and a workable suez canal. 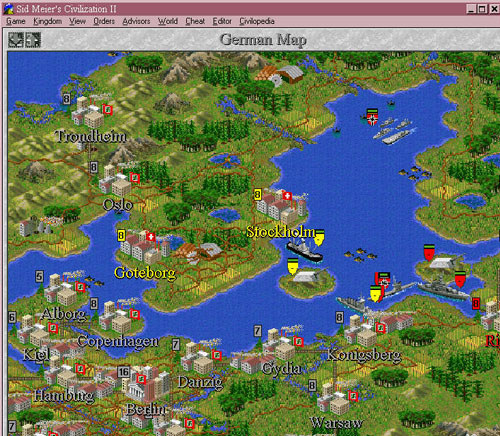 Was attention given to geography and historical details? (Score: 1 )
Full marks here. All events relating to the Battle of the Atlantic were included, an then some. I do not think that historically the Russians made so many battleships and submarines which were a major nuisance.

Were city names and the placement of cities correct? (Score: 1 )
Full marks here again. I gether that very detailed research was done on placement of relevant cities and important events and geographical locations.

Were there innovations used in relation to Terrain? (Score: 0.5 )

No not really – terrain did not play an important part in the scenario as there is very little you can do with the sea.

Did you find the documentation adequate? (Score: 1 )
There was one of those html type readme files which are beginning to appear in new scenarios. There were nine sections: Installation, Overview, Hints and Tips, ‘House Rules’ and scoring system, Historical Notes, Units, Credits, Sources, Distribution & Contact Information. The units section gave a particularly good idea of the background and function of each.

Was the events file sufficient for the needs of the scenario? (Score: 0.5 )
Way too much space was taken up giving too many free units to the AI. I didn’t like having U-boats appearing mysteriously either. On more than one occasion a Type IX U-boat would appear next to a stack of 16 enemy units. Instead, some of the event space should have been alloted to GOTO commands to steer the ships back and forth the atlantic. Instead practically every AI ship, and I’m not exagerating here, was bunched off the west coast of France. This is a major neccessity. 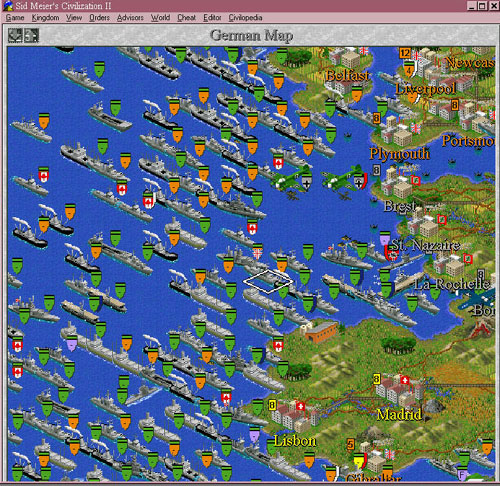 Oh did I mention there were too many AI ships?

Were you happy with the improvement and wonder icons? (Score: 1 )
There were quite a number of existing wonders but very few improvements. All had suitable icons. The technology icons were all mixed up though – not a major problem but worth mentioning.

Did you find any very apparent errors? (Score: 0.5 )
I must minus half a point here becasue of the repeating scnorchel message which was quite irritating.

Do you think a lot of effort was put into doing this scenario? (Score: 1 )
Setting up the map properly and arranging the units would have been a ardous task.

Were there any sounds you had never come across before? (Score: 0 )

Maybe the scenario sould be called the "Silent Service" (a submarine simulation game I used to play on my Apple II).

Did you discover many units not used in any other scenarios? (Score: 0 )
With so many different WWII era ships, I was sure some of them were new. However, the readme explains that most of the units were done by Captain Nemo and Anzac.

Is the theme of the scenario completely novel? (Score: 1 )

Yes, this is the only atlantic war scenario I’ve seen.

Were complex events used to carry the story line or enhance the AI? (Score: 1 )
Yes there was a nice messages telling you what is going on in the rest of the world and explaining when new technologies were introduced. The ENglish also get poorer with every freighter you sink.

Did the author deal with all areas which could be modified? (Score: 0.5 )
Not all areas were modified, the user interface was unchanged for instance but there were many changes (cities, units, wonders). I would have liked the descriptions in the defense minister window to be abbreviated so they don’t run off the screen.