This article offers suggestions for managing the “insects” in your CivIII empire; all those little citizens in the “ant farms” that are your cities. Many players use scientists and tax collectors and entertainers as temporary solutions to immediate problems, fewer use specialists to their full potential as a strategic factor in the management of an empire.

A frequently repeated piece of advice is “Population is power”. Indeed it is, for it allows the employment of specialist citizens. A program of managing the food supply and population in order to use specialists requires some planning to implement but the rewards are substantial.

This approach affects the planning of imperial expansions. Once a nation has reached or exceeded the Optimal City Number, new settlements need no more than nine grassland fields. If each field produces three food then nine fields provide 27fpt, supporting nine farmers and three specialists. In CivIII 1.29 three tax collectors return three gold to the treasury. Twenty such towns return 60 additional gold pieces to the treasury. Those sixty gold pieces can buy a crucial technology, or a much-needed resource, or a luxury to keep the most productive towns productive.

With the right terrain you can build as close as City-tile-tile-tile-City, or even City-tile-tile-City and get the maximum benefit. The tighter spacing makes defense easier, expands the borders without using cultural buildings and makes a healthy contribution to unit support costs in all government forms.

The tax specialist citizen contributes at least two benefits: raising net income and increasing contentment. The tax collector puts more income in the treasury, reduces the need for contentment producing buildings, and can reduce the luxury tax when luxury tax is spent keeping citizens working in mines and waste consumes the additional production.

In this game (CivIII 1.29), tax collectors in corrupt cities produced a 66% increase in gold returned to the treasury. (All examples taken from mid-game saves by active players.)

In CivIII 1.29 the impact of the scientist is less dramatic than the tax collector but still powerful. Implementation follows a similar path: look for towns with surplus food or wasted shields, manage the towns to match food production to population and shields to building project, then assign citizens as scientists to get the effect you want.

This tactic delivers its greatest benefit when you are trying to match a pre-build to an expensive wonder or improvement. It allows you to conserve cash and shields. It is also useful when the rest of the world knows the technology and you want to reduce the purchase cost.

The process follows these steps:

Calculate the number of scientists needed using the Domestic Advisor screen (F1). The beaker count shown in the F1 screen=(Science slider percentage) * (Income-Corruption)+ (Impact of Libraries/Universities). If you want to reduce the time required to finish the research you can achieve that by calculating needed beakers (Beaker count*Turns Remaining), then calculating the scientists needed (1 scientist equals 1 beaker in CivIII 1.29f and PTW) to reduce time to acquire, then hiring those scientists in the outlying corrupt towns with surplus food. In the case illustrated below it required 15 scientists, all of them hired in towns with only one uncorrupted gold and no commerce or research enhancing improvements.

Using the steps described above and hiring scientists increased cash flow by 10% and improved time to research by 20%. The improvement in cash flow was a direct result of reduced unhappiness in the outlying corrupt towns as luxury tax spending went down by 10%. 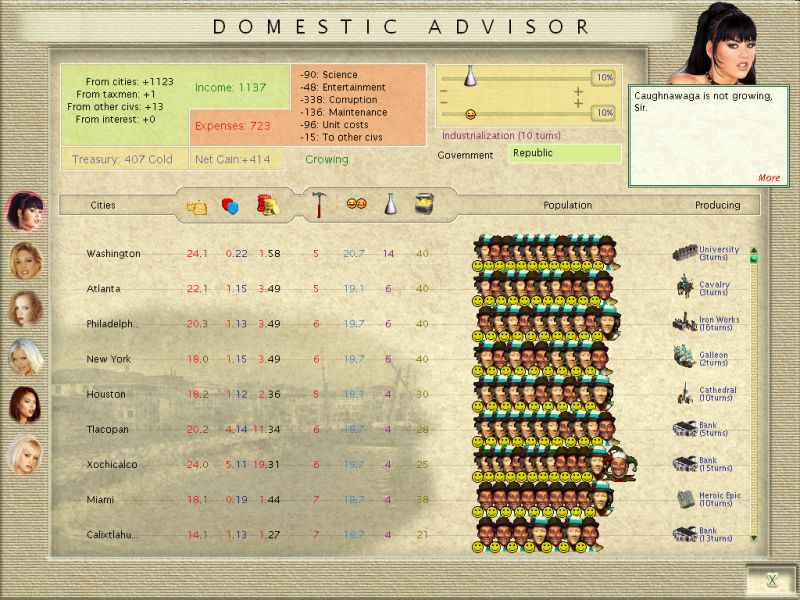 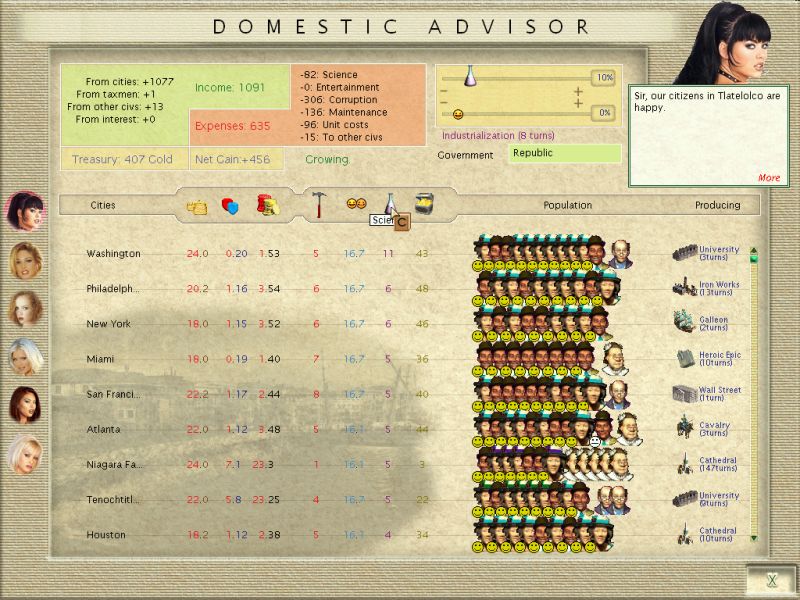 The scientist has a special value. If you employ only one you can research any technology at a total cost of 40 beakers at a rate of one beaker per turn. Most players frequently employ the 40-turn research gambit at different stages of the game in order to conserve cash. This tactic can deliver a bonus in the form of a monopoly or near monopoly on knowledge when the player correctly deduces the research path followed by the other nations and chooses the road less traveled.

The budget sliders work in increments of 10% and using this allocation method expends an amount roughly equal to the slider percentage times net income after corruption. The result is often very expensive when the cost of the technology in beakers is considered. By using scientists you can fine-tune the budget to acquire knowledge at a price nearly equivalent to the cost. In a game where every last piece of gold in the treasury is crucial this is a significant advantage.

As an example, consider a 100K culture game where you are spending every last gold coin rushing cultural improvements and you are in the Late Industrial or Modern Eras where research and technology costs and prices are high, yet you still need to acquire knowledge, but you do not want to increase the pace of discovery by paying gold per turn to your opponents. By calculating the cost of knowledge, then making the most efficient budget allocation combined with scientists to make up the difference, it is possible to save several hundreds or even thousands of gold which can be used to build culture.

The entertainer is the most used and most derided specialist in the game. Given the choice between the other specialists and the entertainer, most players will choose one of the others, or choose to increase the luxury tax to keep the citizens producing food, shields and gold.

One frequently overlooked use of the clown is to initiate We Love the King Day (WLKTD) in a carefully selected location. WLKTD has the effect of reducing waste in the celebrating town.

Yet Another Dramatic Demonstration

In this instance use of taxmen instead of clowns reduced the productivity of the city by over 80%. 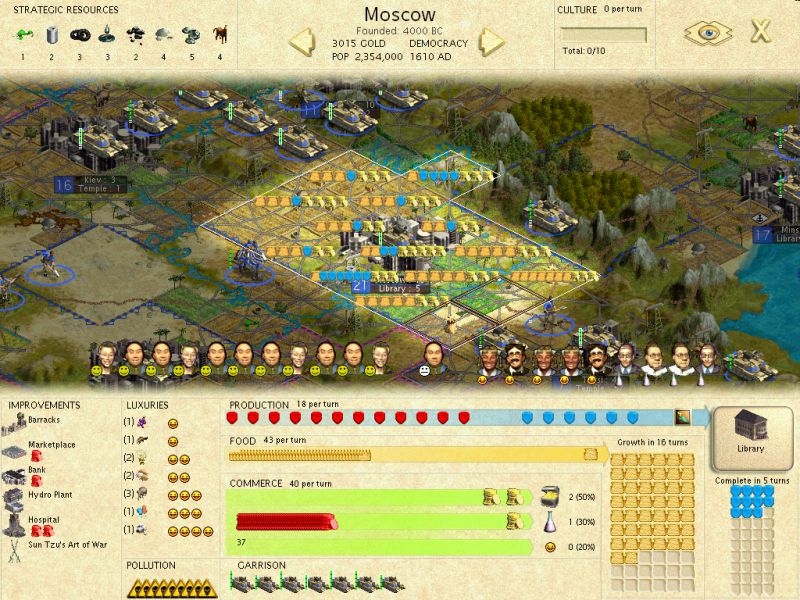 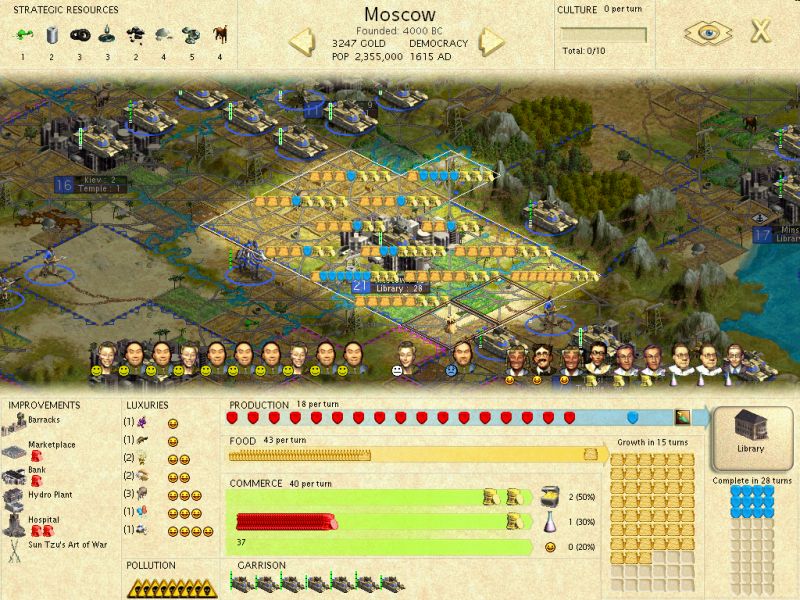 When not to use specialists

Just as important as using the specialists to accomplish your imperial objectives is not employing them when to do so diminishes the output of the citizens working the fields and the specialist makes no meaningful contribution to the imperial goal. As always in Civ III there are few, if any, hard guidelines one can use to make the decision.

In general when your empire is expanding it is not advisable to use specialists. In that phase you should produce as much food as the villages, towns and cities need to reach their natural population limits. When that limit is reached and it only requires a portion of the population to feed the remainder should you consider employing the specialist.

Using specialists in the core towns of your empire is generally not worthwhile. The citizenry is much better employed generating gold or shields to produce or buy important infrastructure or units. Employing specialists has a cost in foregone income and production in those towns. Also the core towns often contain multiplier buildings like marketplaces/banks or libraries/universities, or factories/power plants. In those locations the foregone income or production reduces total output.

There are instances where using specialists in those core productive towns can help balance production and reduce the losses due to over-production, waste or corruption. One can only make this determination on a case by case basis, however, not by formula.

The ideal specialist town[/B] is one where the output of gold, shields and research is reduced by corruption and waste and food produced is well in excess of that needed to support the population. In that situation the player can make an informed decision as to how best to employ the citizens of those towns.

The specialist citizen in Civ III Conquests received significant enhancement. First, the tax collector and scientist gained value. For the tax collector the gold increased to two per revenuer and the scientist’s beaker output rose to three. The use and management of the tax collector, scientist and entertainer do not differ greatly from Civ III 1.29 and PTW, though the expanded power of the revenuer and beakerhead can have an even greater impact on income and research.

Conquests expands the specialist family with the Policeman and the Civil Engineer. The two new specialists add important new capabilities and are available in the Industrial Age with Nationalism (Policeman) and Replaceable Parts (Civil Engineer).

The Impact of the Policeman
The Cop is frequently overlooked as a means to balance production and increase output. They are best employed in towns closer to the core when you have multiplier buildings in place and want to increase the output of commerce (banks and stock exchanges built), science (libraries/universities built) or shields (factories and power plants). The important factor to keep in mind is that there is cost in foregone income or shield production so each policeman employed should demonstrably raise output by decreasing corruption and waste.

Policemen are best when used selectively.[/COLOR][/U] One or two policemen can recover the shields needed to reduce a unit build from four turns to three. Until all the corruption reducing buildings (courthouses and police stations) are in place policemen are also good tools for increasing the uncorrupted gold in a town which is converted to research or commerce through multiplier buildings (marketplaces, banks, libraries, universities, etc.) When factories are built the policeman will also increase factory output.

The Civil Engineer is the other added specialist in the Conquests expansion. The Hardhat becomes available with Replaceable Parts. Each hardhat adds two shields to the net shield output of the city when building city improvements, not military, workers or settlers.

The Hardhat is an excellent tool to enhance the productivity of food-rich, commerce-rich, but shield poor cities or towns. Although the shields produced by a hardhat are not wasted, using a hardhat in a corrupt town to build infrastructure that costs maintenance is a costly tactic, unless the building serves a strategic purpose, such as a barracks in a frontline town, or a library/temple when the goal is domination. Each Civil Engineer costs the equivalent of at least one gold per turn (more in representative governments) so the costs should be balanced against the benefits achieved. If the empire is sufficiently wealthy, using cash rushes is often more effective, so hire the tax collector instead. The best use of the Hardhat is in a coastal town that is producing lots of food and gold but lacks shields. The Hardhat will build that bank or stock exchange or university/research lab cost effectively. In a town that is marginal for a factory or power plant, using a Hardhat, then tuning the output with a policeman works very nicely.

The Revenooer and Beakerhead in C3C

The specialist citizen adds another dimension to the management of the realm. Using them effectively has a dynamic impact on the achievement of your objectives. This added dimension does not come without a cost, however. Managing cities to get the greatest benefit from the specialists can get time consuming and tedious, yet the potential power remains compelling. Many recognize that “food is power” in the early game, as the game matures specialists add new impetus to that force.