I had been meaning to write this article for a while, but it was very hard to explain how I intuitively set up a palace jump. So after weeks of testing I found the exact formula.

When the capital city is razed or abandoned, each city in the empire scores

The city with the most points is the new capital!

A neighbor city must yours, and within 8 tiles walking distance from the target city (a 17×17 square). The old capital does not count as a neighbor.

If there is a tie for the most points, the palace jumps to the first city in the database, which is usually the oldest city. After some old cities have been razed the database gets out of order and it’s impossible to tell where the palace will go in a tie.

Edit: I multiplied all the points by 3 to make the formula easier to work with. Some of the discussions in this thread use the old numbers as fractions of 3.

I finished the Forbidden Palace in Antium a few turns ago, now I want to jump my palace far away to Kyoto. I add my road-building crew to Kyoto, bringing it to size 5. Then I abandon Rome.

So Kyoto is the new capitol! 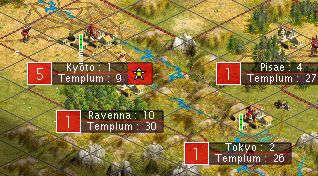 The southeast settler could have built a city, giving Veii and Neapolis another 1/3 point and causing a 3-way tie. Kyoto would still win because it was founded in 4000 B.C.

I did not actually cut it this close in my submitted game. I waited 1 turn for Neapolis and Veii to drop down to size 3 and let Kyoto grow to size 6.