These kinds of forts are some of the more obvious ones. They exist in order to prevent access between two points of a continent and can only be crossed when attacked. They are perfect locations for cities, as they are highly defensible and MUST be attacked in order to be passed.

These forts are designed to assert control over a particular region on the battlefield. They can be bypassed, unlike chokepoint forts, but they provide an excellent reinforcement stationing and healing point. With Walls and a Barracks on a hill they can be very tough nuts to crack. And since the the units are within a city an enemy won’t be able to see what you have there and will be attacking (or bypassing) blindly.

What these are designed for is to steal something from the enemy… whether you intend to use it or not depends on your situation.

The prime example of these in use was during the Gathering Storm-Vox Controli war in the Apolyton Intrasite PTW MP Demo Game I. GS landed two Settlers, one to steal Vox’s iron and the other to cut off Vox’s main Immortals army in the south from their core in the north (building a city near a chokepoint). This stole Vox’s iron (and ability to upgrade more Immortals) and their only north-south road, meaning there was only a skeleton force remaining inside Vox’s core to defend with.

These are forts placed with the intent of flipping an opposing civ’s city. Most often used against AI cities placed in inopportune locations, they aren’t very effective against human players, who either build culture improvements when they see this tactic, or they will simply conquer the city.

Best performed by Religious or Scientific civs that can produce cheap Temples and Libraries, the goal is to steal as much of the other city’s culture (by one or more cities) as possible, giving the greatest liklihood of a flip.

Also known as “Combat Settlers,” these are the kingmakers in the Civ 3 world. They can completely open up a front to invasion where an opportunity did not previously exist. While these forts can be used as ZoC or Chokepoint Forts, their primary purpose is in stealing culture and roads/RRs from the enemy. This gives extra mobility to offensive units, allowing them the ability to attack cities and/or units that were previously safe from attack.

I will use a visual example to illustrate the power of this strategy.

Here is a screenshot of a situation where an Offensive Fort is about to be sprung. 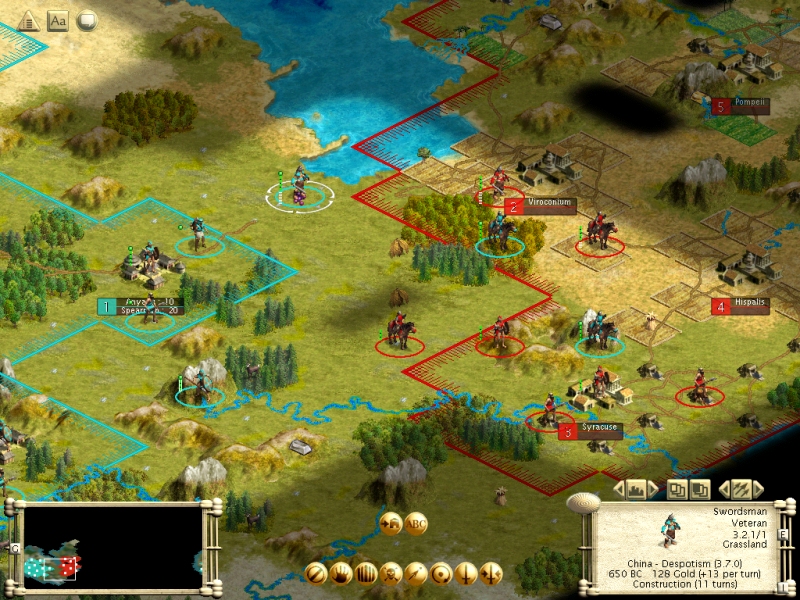 Here you can see the Chinese are bearing down on the Romans (no UUs). The Chinese have 10 Swords, 5 Horses, 5 Catapults, 4 Spearmen, a Settler and a couple Workers in its stack on the wines, with the Romans having 8 Swordsmen and 2 Catapults next to Viroconium (the target army).

The Roman Sword stack appears to be out of harm’s way because of the cultural boundary… only the Chinese Horses should be able to attack… but that is before the fort city is built. 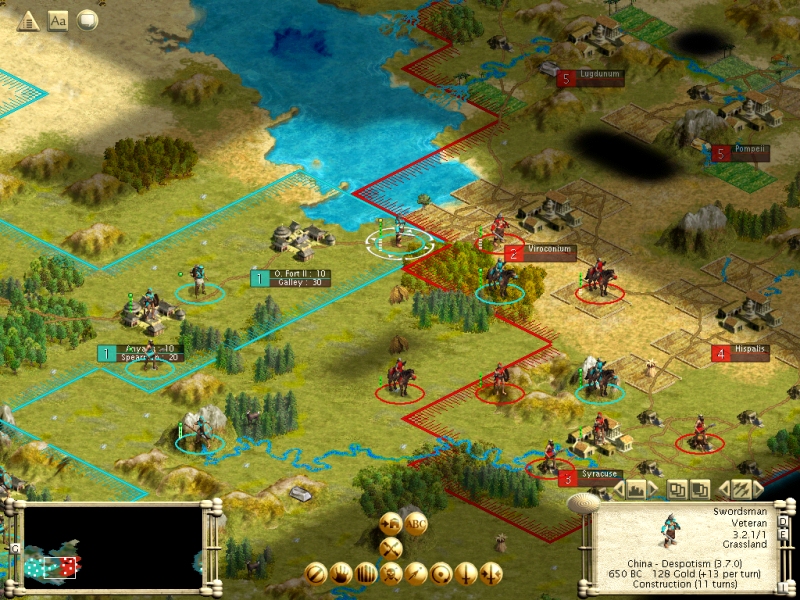 Now that the Offensive Fort has been built, some of the Roman culture and a Roman road has been “stolen” by the Chinese… meaning the Swordsmen and Catapults now have the ability to attack the Roman army instead of just the Horsemen. The difference between these two situations is quite clear… 5 Horses against 8 Swords and 2 cats can be pretty ugly, whereas with their entire army able to strike the Chinese should be able to destroy the main Roman army.

This case can be further twisted, assuming there was a road on the tile with the wines. This would allow the Settler to sneak from out of sight of the Romans, building the Fort the same turn. If your opponent is able to see the Settler a turn in advance, then they may catch on to what you’re doing. Having roads already in place (for example, when you’re fighting in the core of your opponent where a lot of roads exist) can really throw a wrench in a good defense.

A single city has completely changed the outcome of the war. Used in conjunction with other Offensive Forts, a civ can be brought to its knees quite quickly, and this is their best application in order to give the attacker the advantage.

Offensive Forts are best when used against other human players who will maneuver their large stacks instead of hiding them or sending them out piecemeal like the AI. When combat frequently involves tactical withdrawals and general jockeying for position and the better ground, having a trick like this up your sleeve really opens up the offensive options for a civ, especially in the early game when mobile units are harder to come by and not as tough as their 1-move counterparts. However, do not discount their effects later in the game – every RR tile you grab is one extra completely free tile for movement purposes and can often open up cities to attack that were not previously.