Artillery is great! However, it can move only one tile per turn inside enemy territory. Well, that’s no good! If you do that, you could tie up your entire tack of artilleries at least one turn before you can use it against enemy city. If you have a tack of 100 artilleries, we are talking about loosing 100 chance of bombardment. Plus, I want my all my artilleries to be extremely mobile and stay far away from the frontline until they are needed.

1. First I move a settler three tiles away from the enemy city. Don’t forget to include at least four infantries to defend your settler. 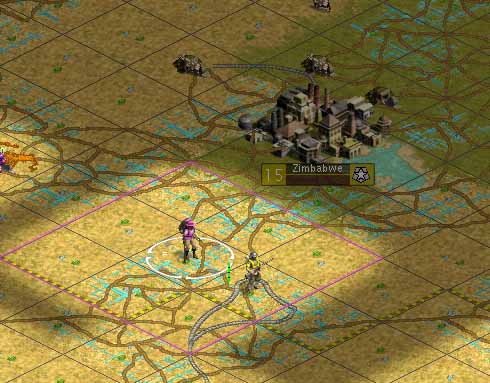 2. By the next turn, you should be able to build a temporary outpost and use it as a base to attack the enemy city. In this case, the enemy capital city of Zimbabwe is the target. Immediately build the railroad and move your stack of artilleries into position. I also move on a cavalry unit next to the enemy city so that I can see if my artillery hit its target. 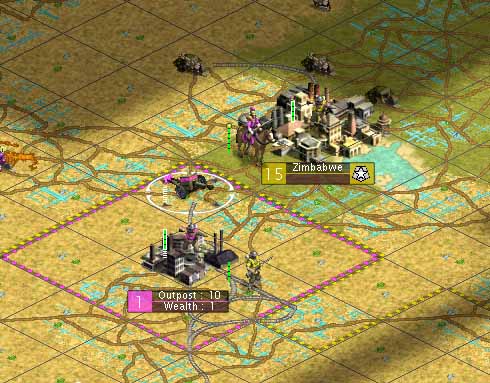 3. Now, start bombard the enemy city to dirt. In this case, Zimbabwe is defended by six infantries. You need to reduce all defenders hit point to 1. 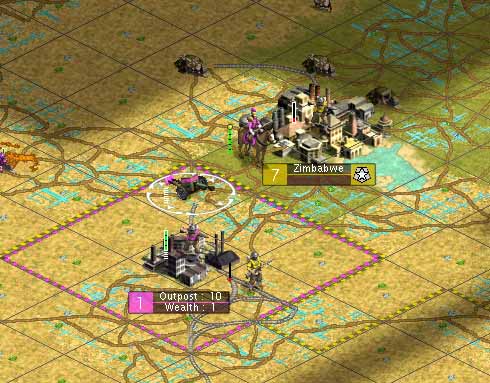 4. After taking the city, I disband my outpost and get ready for taking the next city. Any artillery that didn’t get a chance to fire, I just move them against another city.

With this method, my stack of 100 artilleries, I can take at least three heavily defended cities in every turn. The war can start and end very quickly for the enemy. Artillery rocks! Artillery and cavalry are my #1 units. By the time I get tank, I usually already control the whole world. 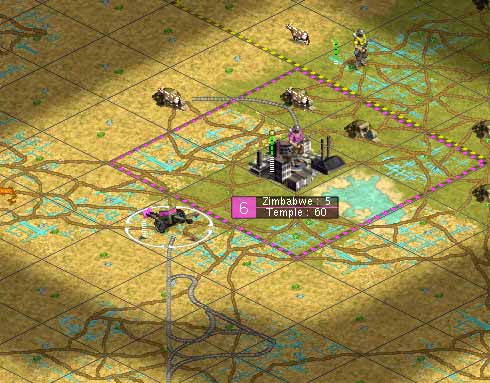 Oh, I forgot to mention one thing: After I liberate/capture a city, I would normally use that city to rush produce more settlers or workers. The good thing about producing settlers and workers in a recently captured city is that we don’t have to pay for their upkeep. If you produce a worker, that worker will be treated as slave worker (work twice as slow as normal worker). If you produce a settler, that settler will have your former enemy’s nationality; therefore, you don’t have to pay upkeep for them.

I normally have a stock of at least a couple dozen settlers without having to pay for their upkeep.

When war is declared, I would send an average of three of these foreign settlers into enemy territory in every turn; if the enemy manage to destroy one of my settlers, I would still have many others to play with.

Therefore, they can expect their city to be under bombardment in every turns.