In most games when we as human players carry out a war we usually have a very specific objective. We may need to get a resource, or a lux or capture a wonder or a vantage point. When that objective is met we sue for peace as soon as possible and then move on to the next objective. That’s the most common type or war. However, there is another type of war.
This is the long drawn out war of attrition. These wars are most seen in Always War scenarios and in wars during the late modern ages when two titanic powers go for the final showdown to determine who should rule the earth. Since in this war the final outcome is the complete annihilation of one side, any strategy that can provide advantage is helpful. The pillaging offensive strategy excels in this second kind of war to the extent that it is truly game unbalancing.

The specifics of the strategy

For this to work you need an army. Load the army with your best defenders. If you have the pentagon, then even better. Load up four of your best defenders into the army. (Usually, rifles seems to be the least powerful defender with which I have this working. However, I see no reason why it should not work with muskets too, although I have never tried it with muskets). Take at least four cavalries and add them into the stack of defenders. Now make a beeline for your enemies capital. Never move the cavalry out of the defensive umbrella of the defensive army. After a potentially long march that can take upto a dozen or more turns your army should reach the enemy capital. While the army is marching rest assured the AI will not even touch it with a ten foot pole. To quote handy900 “It is amazing to see 12 infantry walk right past a rifle army and never fire a shot! It’s like they can’t even see it!”. In my experience, the AI never attacks a defending army unless it has a very decent chance of winning, i.e. it too has an army, preferebly an army loaded with attacking units.

Once you reach the capital the fun begins. In one turn you can pillage 1 + x squares with the army and x cavalries. The army pillages the square on which it is standing. Then Cav move #1 is to opponent square, pillage on move #2, then move #3 is back to the square where the army is. Be careful with hills, if you are moving from Flat to hills, your Cav’s turn ends on move #1 to the hill (in opponents territory). If in mountains or hills already, Pillage with the Horse first (move 1), On move 2, move to the next hill or mountain (the Cav turn will end here – 1 square from where you just pillaged). Now move the army to catch up with the CAV. On Flat lands you can pillage alot faster, but pillaging mountains & hills cripples AI’s production & often takes out luxs & resources.

Here is an image of the result you are looking for. 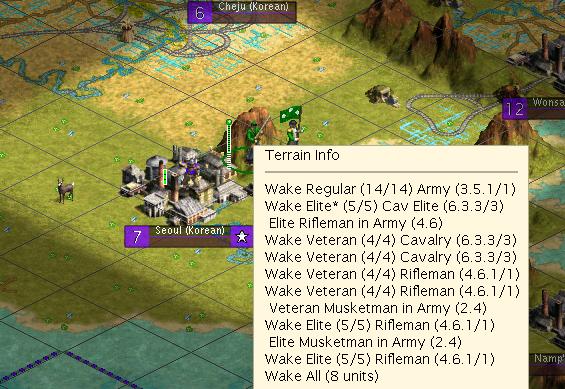 Effects on the enemy

The deleterious effect on the enemy is profound.
(a) Since the capital is disconnected all trades with otehr civs for resources and luxes stop.
(b) The capital, typically the most productive city by way of shields, and science is taken out of commission.
(c) The capital’s population crashes in a few short turns.
(d) Lots of workers usually get trapped in the capital, since they never venture out as long as the cavalries are there, for fear of getting captured.

Also, this stategy can be used very effectively to deny a crucial resource permanently to the enemy. For example, let’s say your enemy has two sources of oil. Send one army/cav combo to the capital. Then send two more such combinations at the two oil sources. Once the sources are disconnected and the capital is also disconnected the enemy is reduced to using cavalry as their potentially best attack unit. If this is a modern age war, from then on the game is won. So potentially for just three armies and a dozen cavalries you have stacked the game drastically for your favor.


This strategy has been used to lethal effect by me and handy900. Originally I used only the armies. Hence the pillaging was a bit slow. This was bettered upon by handy900 who introduced the addition of the cavalries. {thanks also to him for the image above, which has been taken from his AW game}

Any comments and ideas on this would be much appreciated.