There are many that would know me as a single player gamer, but ever since Jesse Smith tossed the CIV CD down I-83 (amazingly, the traffic behaved) 18 months ago, I’ve been, well, converted to Multiplayer. The game’s gone through a lot of changes since then, and a lot of fond memories over the many months. Well, now it’s time to give a preview of the Multiplayer part of Civilization IV!

So, where should we start? Well, for starters, did you know that the first thing Firaxis worked on in Civ4 was multiplayer? Yes, that means 2 solid years of multiplayer coding and testing. Anyway, let’s start in the lobby. Like in Civ3, you can start a new game, join a game, and now, it even has a buddy list. There is a DirectIP join, which can be accessed just before coming into the lobby. Well, enough about the lobby! Let’s go create a game, and get into some multiplayer action! 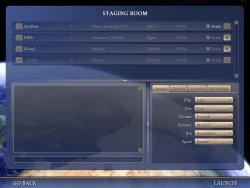 Now let’s go to the Staging Area. You’ll first notice that it isn’t your cluttered Civ3 setup. Yes, those controls with the arrows can be slid. The ease at which they move is only a hint at the things to come. Here, you can select your team, civilization, and even the difficulty level as a handicap. The game even has five speed settings! Yes, you heard me right – five! "BLAZING!!!", as it implies, makes for an incredibly fast paced game for those who hate micromanagement, while "Snail" gives you more than enough time to think, plan, and carry out your actions before the turn changes. Other speeds include "Slow", "Normal", and "Fast". Up to 17 additional slots, excluding yourself can be added. Additionally, any level of play (there are 9 difficulty levels in the game!) can be chosen as a handicap. "Noble" is the standard level. For this game, I played with two other players on a map called "Lakes". As the name implies, it has lakes scattered about the map. Launching the game is a very smooth process, and takes you right into the game. 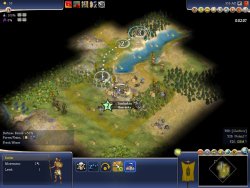 Here’s a typical start in a Multiplayer game. I’ve got the resources I need to be able to conquer others, or defend myself. Like single player, the first dozen turns were spent building infrastructure, and a few units to defend myself with. Unlike Civ3, it is very, very hard to mount a successful rush against someone, as there are numerous ways for them to defend, whether it be spearmen to defend against a horseman rush, or axemen with a melee bonus to combat a swordsman rush. 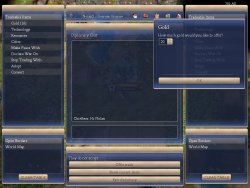 I later made contact with another player, and traded maps. We agreed to attack the 3rd player, GBM. In addition to using the diplomacy window, "team chat," or chatting to one player can be used. For team chat, the keyboard shortcut is now "tab", and is "shift-tab for all players. In team play, it’s possible to use signposts and lines to direct where an attack is to take place, for example. This opens up a nice level of coordination. 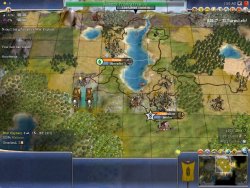 In the above two pictures, I’m coordinating an attack on GBM. Nolan has also gifted me an elephant to attack GBM with. Yep, you read it right! Unit gifting! Building up for war is more interesting than in Civ3. In Civ3, it was normal to have stacks of 30, 50 and even 100 units of the same type (i.e., Swordsmen, Mounted Warriors). Now, having huge stacks means your economy will take a hit, especially since units not inside your borders have higher support cost in Civ4. So, it’s best to "mix and match". My plan in this game was to build some Macemen, Catapults, and defend it with a few Pikemen and Musketmen. Having a mix of units not makes it easier to anticipate the opponents attack, the promotions that each of those units get can really help out in unexpected situations. 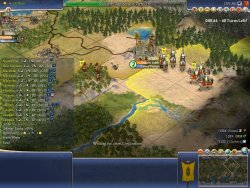 Here, I built a city on a hill, and built some walls for it. Now it has pretty good defense as GBM tries to attack the city. Because of the muskets and pikes in the city, GBM’s units weren’t able to hold on. The experience points I gained, I used to give my troops more promotions. You can also see the promotions I have used to make the best of the current situation. I have units that can attack cities better, units that can heal others in the stack, and units that can attack swords, and macemen more efficiently. 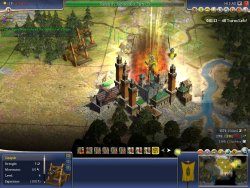 Remember the lowly catapult of Civ3? Well, it’s back, and back with a vengeance! Not only can it bombard a city’s defenses down by 15% per turn, it can attack and damage multiple units at once. As if that’s not enough, the catapult has a 25% chance to retreat to fight another day! These are what armies were to Civ3 – City Breakers. The catapult does have a few weaknesses: it doesn’t get defensive bonus and the horse archer unit has +50% attack bonus against catapults.

Battles in Civ4 are also quick, and there’s even a quick battle mode that let’s you skip the offense and/or defense animations. 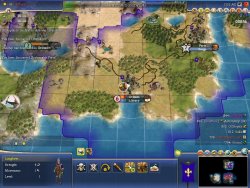 So, what else is new in Civ4 Multiplayer? Well, in some MP games, when there was the extremely rare OOS (Out Of Synch) error, we were able to continue the game without being kicked back to the lobby. There are also features in place to help prevent cheating in the game. Additionally, when I played in multiplayer games, I experienced very little to no lag for the entire game. It’s not rare to see even an 18 player game go on for hours and hours on end. Civ4 is a very robust piece of software. 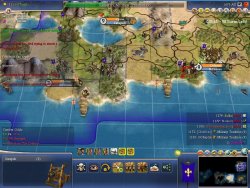 Another aspect to Multiplayer that will be a lot of fun is Team Play. When in teams, research and wonders will be shared amongst all players. This picture shows another kind of game, large islands with a later era start. Thus, the object was to team up on research for galleons and frigates to control the seas. This is a screenshot of an invasion in progress. While not shown here, players can put their units into their teammate’s ships. This makes team-play a lot of fun, and opens up many new strategies. One player can concentrate on units, while the other concentrates on naval supremacy.

In conclusion, Civ4 MP will be a much more enjoyable experience than was PTW and C3C. Perhaps the most fun players will have against each other is Cold War style battles, even in the ancient era, as swords, axemen, and horsemen give way to macemen, catapults, knights, elephants, muskets, and so on.

Discuss this article on the forum!