Our Civilization IV preview coverage continues with a detailed article focusing on the ultimate weapon in Civ4: the nukes. We will tell you all you need to know about nuclear weapons and show you some really cool screenshots and full screen animations to let you witness nukes’ enormous destructive power! 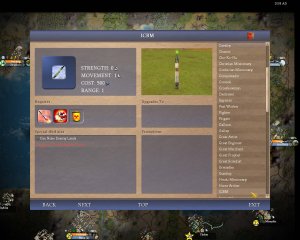 Nukes are also known as "ICBM" (intercontinental ballistic missiles), and they are the most powerful weapons available in Civilization IV. For the most part, nukes work similar to the nukes in Civilization III, with a few differences.

In order to construct nuclear weapons, you need to have researched the Rocketry and Fission technologies, and have access to a source of Uranium, which is revealed by the Physics tech. Like in Civ3, before anyone can start building nukes, the Manhattan Project must be built first, whether it’s by you or by someone else.

ICBM costs 500 hammers to build and is the only nuclear weapon in Civilization IV (the Tactical Nuke from Civ3 is not included). Once built, they cannot be move out of the city they are built in. They have unlimited attack range and can target any enemy cities and lands.

Detonating a nuke causes damage to the target tile and the eight adjacent tiles are also hit just as hard. An important difference from Civ3 nukes is that, in Civ4, all the tiles that would be affected by a nuclear explosion must be outside your national border and you also can’t have any of your units on those tiles. So if you want to nuke a big stack of enemy units next to your own city, you will not be able to do that in Civilization IV. One time I had a spy unit lurking in an enemy city and when I tried to nuke the city, it wouldn’t let me — I had to move the spy out of harm’s way first.

Besides that, you also need to make sure the target area doesn’t have any friendly Civ’s units, if you don’t want to declare war accidentally.

In addition to the above damages, some of the affected tiles may become radioactive fallout, which makes the tiles totally unworkable and may also reduce the health of the city. Once you have discovered the Ecology tech, your workers can scrub the fallout to make those tiles productive again. 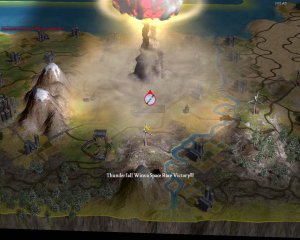 There are serious diplomatic penalties attached to using nukes. Each time you detonate a nuke, the attitude of the Civ you nuked will go down by 2. Your relations with other civilizations will also drop and soon you may find yourself at the receiving end of someone else’s nuclear arsenal. You have been warned!

The last effect of nuclear weapons is they could cause Global Warming to begin, turning previously fertile tiles into useless desert. Prolonged nuclear exchanges will transform the world into an uninhabitable wasteland.

After the United Nations is built, you can vote in a UN resolution called Nuclear Non-Proliferation Treaty which will ban the construction AND use of all nuclear weapons (although existing nukes don’t disappear). If the resolution is passed before the Manhattan Project is completed, you will not even be able to finish the Manhattan Project. (Note that in Civilization IV, the civ that builds the United Nation does not automatically become UN Secretary General — voting for the position takes place first and the winner can propose resolutions to vote on. Once three resolutions have been voted on, the Secretary General election takes place again.)

There are a few ways to protect your cities from nukes. The first is the SDI project, which has 75% chance of intercepting any nukes targeted at your territory. The second is by building bomb shelters in your cities — they reduce damage from nukes by 75% and is a great way to protect your city population. Without bomb shelters, you city’s population could be reduced by as much as 50% by a single nuclear attack. With bomb shelters, your city’s population only drops by 1 or 2 from each attack, so it’s important to build those.

Besides SDI and bomb shelters, you can also build a nuclear defense by constructing a sufficiently large stockpile of nukes as a deterrence. You know what to do when someone (ex. Gandhi) is foolish enough to drop a nuke your way.

I believe that’s all there is to nukes.

In another 10 days, you will be able to see the familiar words when dealing with the AI civs: "Beware, our words are backed by nuclear weapons!" Until then, enjoy the nuclear explosion screenshots and animations below showing the awesome explosion effects!

Screenshots (9): Visit the Gallery for the Nuke Screenshots

NOTE: Due to the large file size of the animations, you should right click on the links and save them to your computer first. The two are similar so just download one that matches your screen resolution.

Discuss this article on the forum!