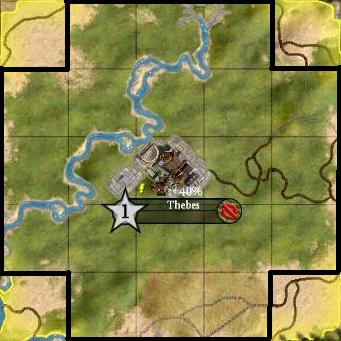 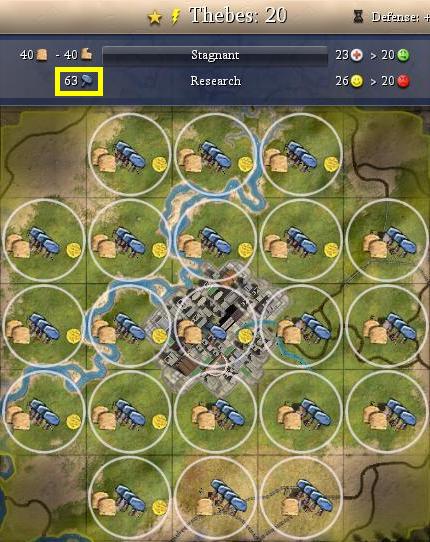 The power of State Property is no great secret, and I don’t expect that 63 base production is any kind of record.

But when I realized that this football field generates more hammers than each of the production centers in my last game, I became convinced that I didn’t understand how production tradeoffs worked.

In this analysis, I’ll be working backwards through time, from the modern era to the past.

So for the moment, I assume State Property, and all the techs needed to maximize the yield of improvements. This means big mature cities without happiness or health concerns.

Furthermore, I’m assuming cities with a production specialization. In other words, the prime directive is to maximize hammers; commerce serves only as a tie breaker, GP points matter not a whit.

I’m also assuming an effectively infinite capacity for Engineer specialists. In other words, the analysis is going to start to break down if you are dealing with cities sustaining more than 46 food per turn (52 in the ironworks city). I don’t expect this to matter in practice.

Resources occasionally appear in worked mines – I’ve no idea how often, or what the relative probabilities are of getting strategic vs luxury resources, so I’m going to pretend that this happens infrequently enough that it can be safely ignored.

With 40 food available in the fat cross, distributed entirely on good tiles, our production yield is 63.

It really doesn’t matter much how that food is distributed. For example, you still get 63 hammers if you replace a plains tile with a grassland hill.

Also note that at this point, we are counting unimproved food.

The presence of desert, mountains, ocean, and other junk tiles reduces the productive population. A more general equation would be 2 * pop food yields 3 * ( pop + 1 ) hammers.

For each two food beyond 40, you get two more hammers by running an engineer specialist.

Alas, an additional one food beyond forty doesn’t do so well; you get two hammers per turn when you are starving, and no hammers when you are growing. If you actually starve away a pop point, the food bar stays empty, so the growing phase is approximately twice as long as the starvation phase. Under these conditions, an extra food is worth 2/3 of a hammer, on average.

When you do have an excess of food, there’s often an opportunity to eek out an extra hammer by retooling your improvements. The banana plantation, which brings you to 42 food (65 hammers), can be replaced by a banana workshop ( 40 food, 66 hammers). 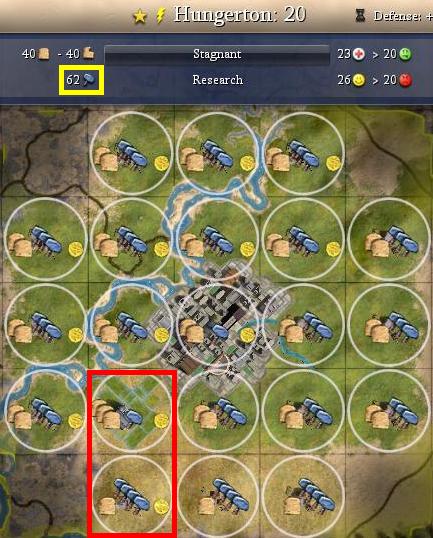 The two extra plains tiles give us 38 food as our base. To correct for this, we need to replace a workshop with a farm. We’re giving up three hammers to get two food in return, for a net of -1H/2F. As usual, it doesn’t matter whether you replace a grassland workshop or a plains workshop – the net yield is the same.

Farm here refers to any +2F improvement – deer camps, sheep pastures, banana plantations are Farms. They just have some extra vigorish, so prioritize hooking up these resources over irrigating land, when necessary.

In the previous section, I told a small fib…. 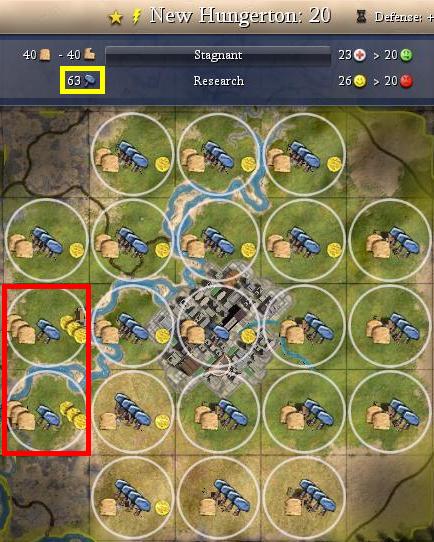 Same topology, but I’m back to 63 hammers. The big advantage of a flat stretch of river is that it can be used for either a workshop or a watermill, allowing you to add food to a city without cutting production.

So for cities lacking food, each watermill that you can put down is equivalent to an extra food. Count your watermills carefully; watermills can’t be built on corners, and they can’t share the same edge of river. They can be adjacent when the river zig zags. 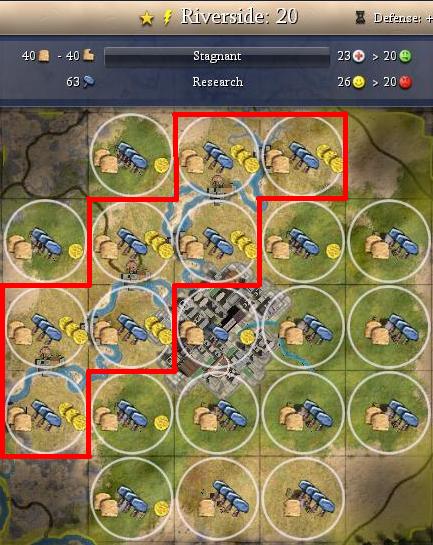 Surprise! Adding hills to a city is neutral, and it’s possible to have too many hills. 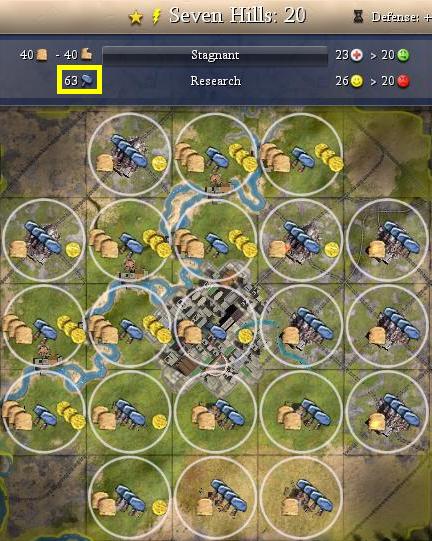 Changing these workshops to mines on hills is production neutral, because we had watermills in reserve. So we’re doing ok so far, but we’ve run out of watermills. 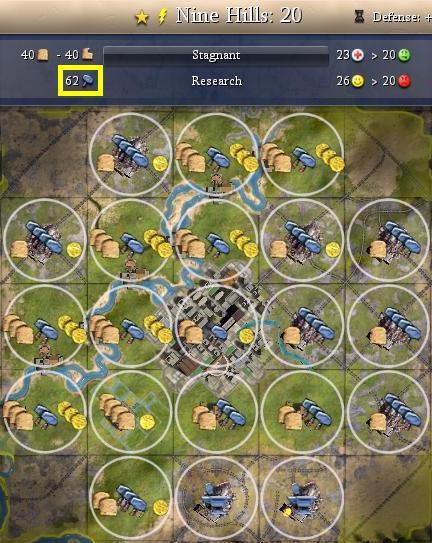 Two more hills means the loss of two more food. The net loss is one hammer, as we switch from three workshops to two mines and a farm. 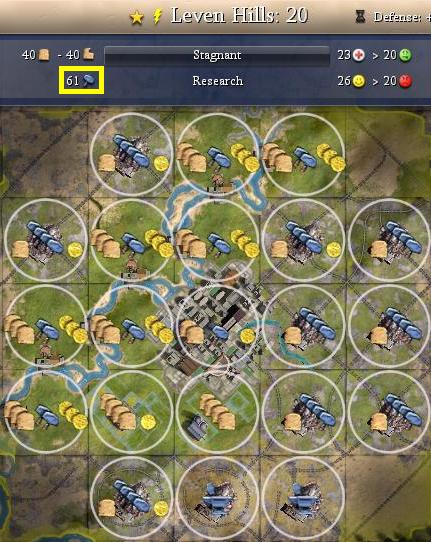 Again, we need to irrigate, and we lose another hammer.

So up to this point, we are paying 1 hammer for every two food missing in the city. 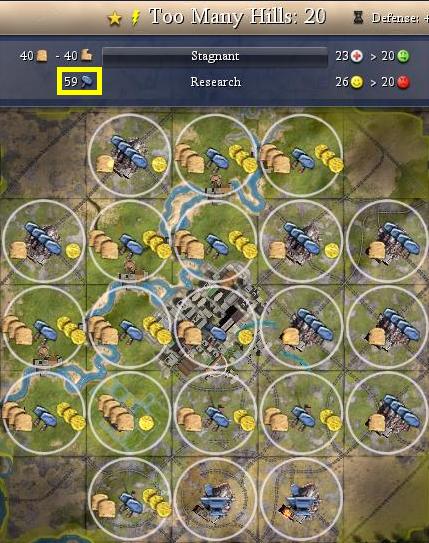 Busted. With no more room to irrigate, we have to break out the windmills. In effect, we’ve converted three workshops to three windmills, which is just a lousy deal. From here on out, you lose one hammer for each food you lose.

You have to exercise some care when counting food in tiles that you cannot improve. 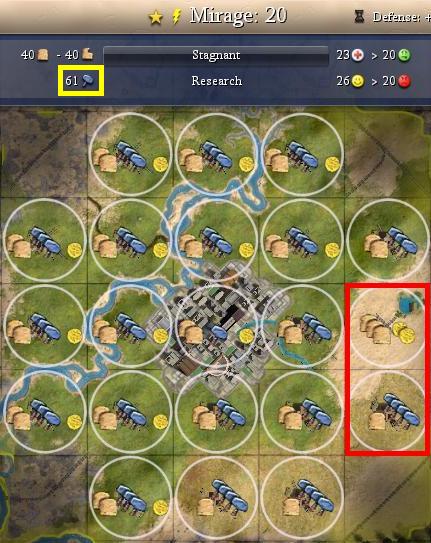 These tiles look, from a food perspective, as though they are equivalent to a pair of grassland tiles. However, the restriction against improving an oasis means that tile represents one hammer, rather than three. In other words, you lose two hammers working that tile (which is still better than not working it, but not much). 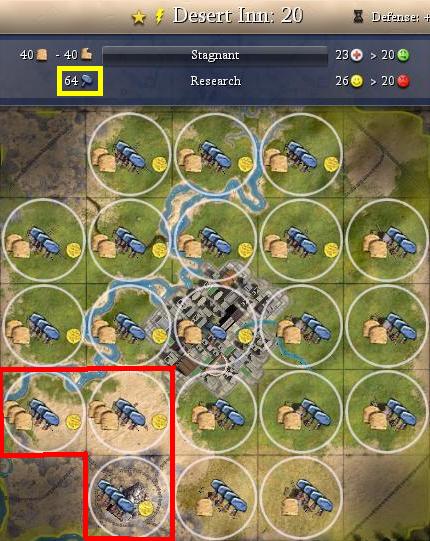 This is my favorite illusion. It looks like you have gained a hammer; instead of nine hammers courtesy of three grassland workshops, you have ten hammers at the same total food.

A windmill on a desert hill is an Oasis.

Beware of double counting: both corn and iron, when improved, give five production over the base tile. But we already counted one for the corn when trying to get the food to balance; it would be an error to count corn as food and a strategic resource and metal.

Don’t forget to an extra hammer or two if the city tile has a goodie.

In production cities, improvements are properly classified by the F+P yield they give.

You get +3 from Mines. Watermills and workshops are mines, as are the funny looking irrigation improvements one applies to corn, rice, and wheat. The city tile itself, which yields two food and a hammer without using up any food, is a Mine.

You get +2 from Farms. You don’t mine gold in a production city, you farm it. Likewise you are farming horses, stone and oil – hook them up on the flats, but if you find them on a hill you would rather mine them.