While playing some recent games, I became curious about whether or not it mattered if I concentrated all of my Great People Point production in one city or not. Assume that you have a finite number of points you can generate across your empire, you can either focus all of them (specialists and wonders) in one city, or across a few cities (say your three best cities).

As I’m sure we’ve all seen, cities with a single specialist (+3 GPP/turn) steadily accumulate points, however the capital may be generating many Great People in the meantime, and thus raising the bar, faster than the smaller city can catch up. Basically, any city that cannot produce 100 Great People Points in the time it takes for the biggest cities to generate another Great Person will never produce one.

So I built a simple simulator, so I could explore the dynamics. These are the assumptions/parameters I used:

– I ran the simulation and measured the number of turns required to generate 20 Great People, and then normalized the data about d = 1.

Here is the result: 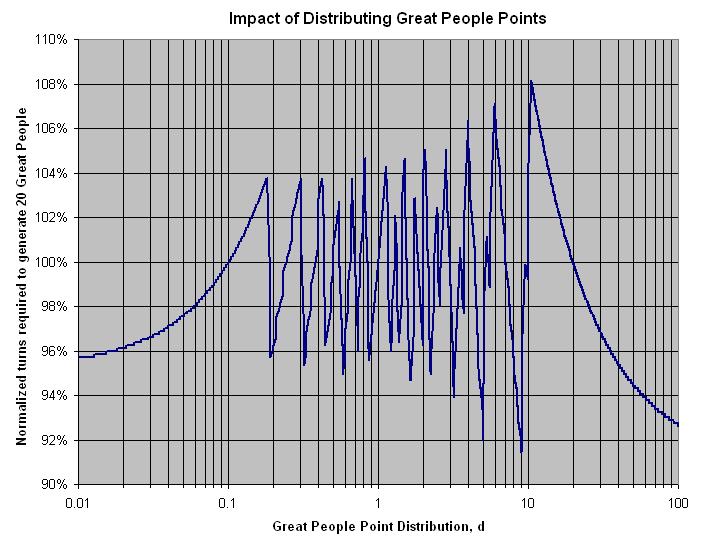 Please note the use of a logarithmic x-axis, and the y-axis is zoomed in. Lower is better, as this denotes fewer turns required to generate the same number of Great People.

Some observations to make:

This case assumed that there were no boosts to Great People Point production. Most boosts are empire-wide (Parthenon, Philosophical, Pacificist), and thus the d value is unchanged (all numbers get bigger, but the ratios stay the same, you have 60 points to distribute instead of 30).

However, the National Epic boosts Great People Points by 100% in just one city. Let’s see how that impacts the distribution of points: 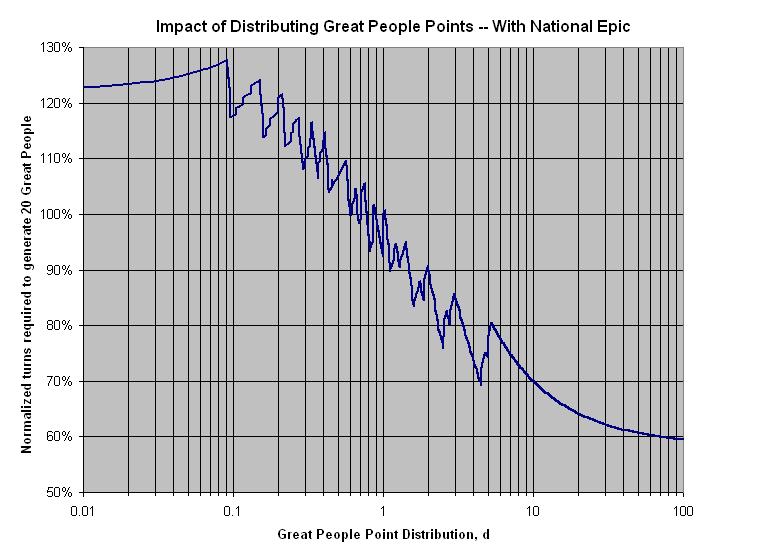 We basically see the exact same behavior, but it has been “tilted” and moved to the left by 2x with the impact of the National Epic’s 100% multiplier.

Now we see some more interesting, and expected, behavior:

In summary, in the reasonable range of d, there is a potential to increase your Great People production by 20% to 30% if you focus your Specialists and Wonders in one city with the National Epic. Other cities will be able to produce Great People, up until a point. If you get many Wonders and Specialists in your National Epic city, you may gain no Great People from having a single specialist or wonder in another city.

As with most other game systems in Civ4, its all about specialization. Having jack-of-all-trades cities is significantly less efficient.

A little more detail on cities trying to catch-up to a pace-setting primary city.

Here’s an example off of the National Epic curve, where d = 5.25 and within the scope of a game, the other cities are never able to generate a Great Person. 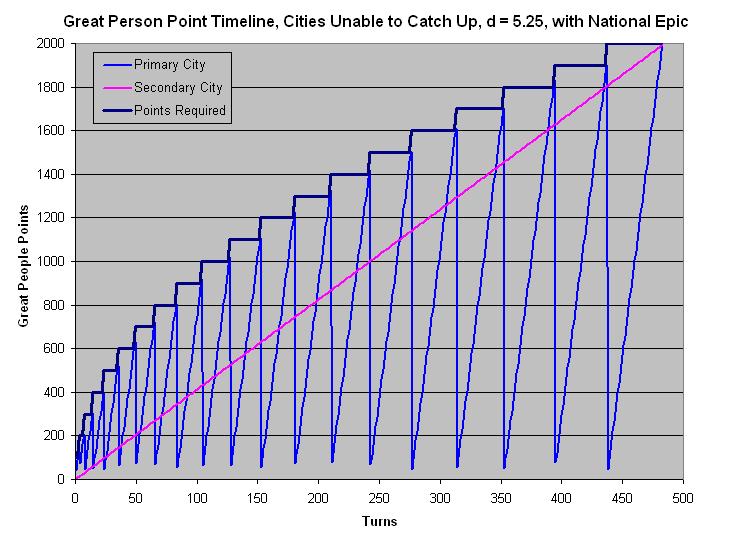 Now, the required number of points goes with the square root of turns, while the accumulated points for any city goes linearly with turns, so there is always some point in time where a city will generate a Great Person. Its just that with a sufficiently fast primary city, this point in time may exceed the 400 turn limit of the game. 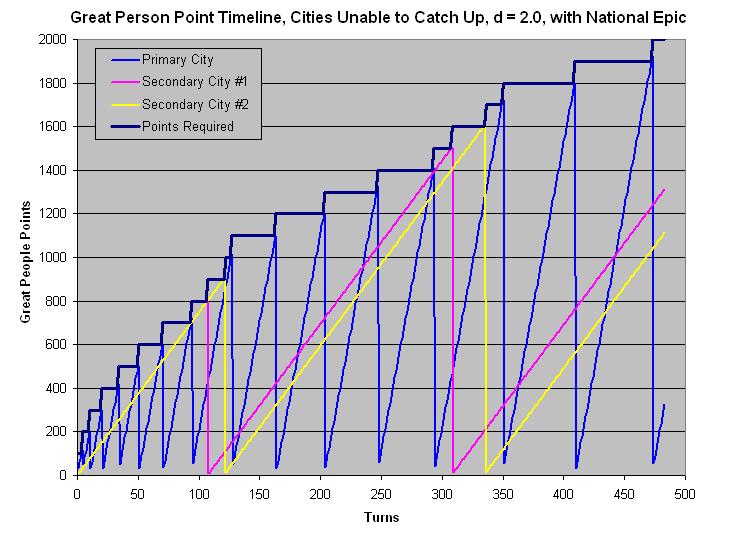 Here we see that the secondary cities produce 4 Great People, and the primary city produces 16 Great People. Even this relatively slight difference in raw Great People Point production (15 vs. 7.5) has a large effect.