Note – I believe that patch 1.52 changed the specifics for city upkeep. I’ll be starting a new job in about a month, so I should soon have money for a computer capable of handling lots of repetitive city placement tests to get at the specifics. Until then, be warned that upkeep is apparently higher than it was under the “public beta” version shipped with the original release.
———————————————————————————

One of the much-discussed new features in Civ4 is the introduction of the supposedly ICS-killing city maintenance. In preview after preview, we were told that REX* the rabid settler dog has finally been put down or at least kept on a tight leash. For the first time, a city can actually lose you money. However, old habits die hard and we’re already seeing claims in these forums that the ability to chop for settlers will leave this old dog tearing up the backyard for years to come. In the interest of tossing old REX a bone, I’ve attempted to dissect the city maintenance system to figure out how well it does its job. I have conducted a series of experiments to determine exactly how long the leash is. All experiments were conducted under the following settings.

Difficulty = Monarch
World Size = Standard
Game speed = Standard
Civ = Arabs (Chose a non-organized leader just in case it has an effect)
Map = Great Plains (For maximum freedom placing cities)
Civics = all default
All tests were conducted with the world-builder on.

Test 1 = Number of cities maintenance:
For this test I founded the capitol in the middle of a large open area and began placing new cities within 3 tiles of the palace. At this distance I had already observed that there is no distance-based city maintenance. Note that the world-builder is capable of placing cities in adjacent tiles even though this is not allowed in the game. All cities were connected to the trade network by default, although in another test I confirmed that this does not seem to affect city maintenance, at least for cities within 10 tiles or so of the palace (unlike corruption in Civ3). I then observed the amount of city maintenance for each additional city. The first observation is that the maintenance from the number of cities is not the same for each city. This is probably to avoid exploitable rounding errors which would occur if the value were evened out over every city, as happened with the ring city placement bug in civ3 vanilla. Instead, each additional city raises the maintenance slightly in a select number of existing cities. I did not determine the formula used for selecting cities but instead graphed the increase in maintenance per turn for each additional city. As the game runs very slow on my computer, I did not go through the process of separating out city maintenance and civic maintenance, but I checked on several occasions and found civic maintenance to be roughly 10% of city maintenance. This would presumably be significantly higher if you run expensive civics, and it appears to scale roughly with city maintenance, so if you plan to spam cities and run a hereditary police state with organized religion, the organized trait may actually give you a noticeable benefit. What’s more, the manual claims that civic costs also increase as total population increases (p.83), so I could picture it getting pretty high in certain cases. 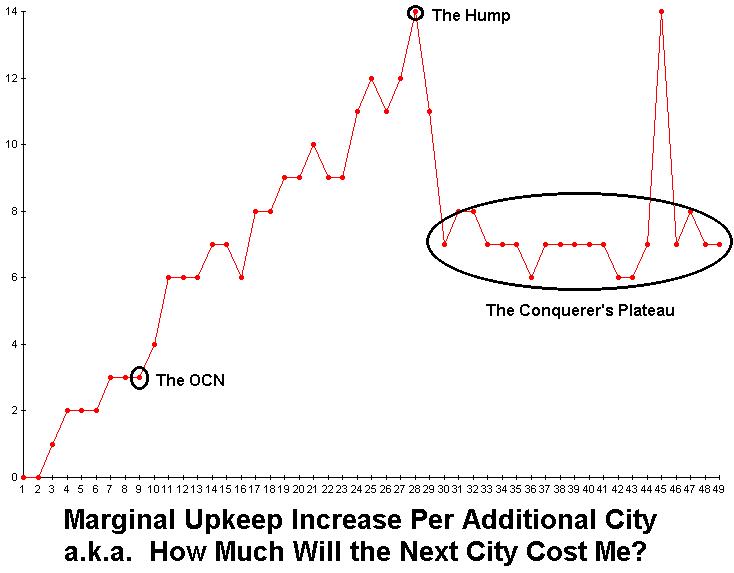 As shown by the graph, the cost in gpt of a new city increases as you add more cities. There is a discontinuity around ten cities after which the cost rises sharply, making 9-10 the optimal number on a standard map before massive city upkeep starts to kick in. After this, the marginal upkeep rate increases until your 28th city costs you 14 gpt! Note that this city will not show 14 gpt in city maintenance. Much of the upkeep is distributed as a slight increase across other cities. After this point the marginal increase in upkeep falls dramatically, to 6-7 extra gpt per city. This is because the number of cities component of city maintenance can never exceed 6 gpt per city, so once all your cities are maxed out this component can never exceed 6 times the number of cities. In my observations, the number exceeded this value because of civic upkeep. This is good news for warmongers because once you have conquered 30 cities, future conquests will be a little less painful, especially if you run state property to eliminate the (probably huge) distance based component for your world-spanning empire. As an aside, each holy city potentially gives you 1 gpt for each city you own, so owning 6 holy cities will pay all of your number-based city upkeep if you relentlessly spam missionaries. Owning all seven will turn a profit on state property! If you’re hell-bent on ICSing, I would recommend the Arabs. You start with Mysticism so you have a chance at grabbing lots of religions early and the philosophical trait should lead to quick great prophets to found the appropriate shrines. Call it the “Babylon” strategy after the villain in the “Left Behind” series who tries to conquer the world by founding a universal syncretistic religion. Commie Universalist Arabs take over the world! Oh My!

Test 2 = Distance-Based Maintenance
[Update – the value established in this section is a minimum. Some undetermined factor can increase distance upkeep to more than this amount. Thanks to Requies for noticing this]

To test distance-based corruption, I created a horizontal line of 30 cities with the palace at one end and measured the distance-based component of maintenance for each one. The results are shown below: 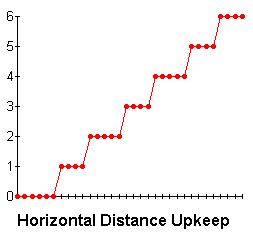 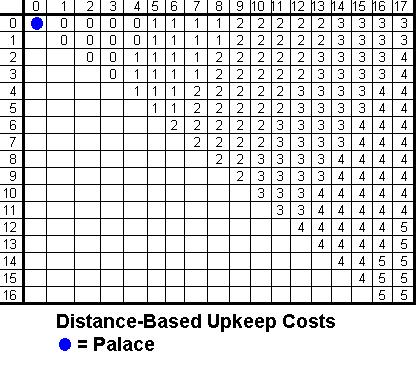 This is great news because anyone who’s ever done an RCP in vanilla Civ3 knows how to calculate rings on the map. There’s even a utility to do it for you. The trick is to map out the rings of the appropriate distances (4,9,13,18,etc.) and place your cities inside those rings to avoid increasing distance upkeep. Pictured below is a formation that I’m naming the “Cheesy Circle” 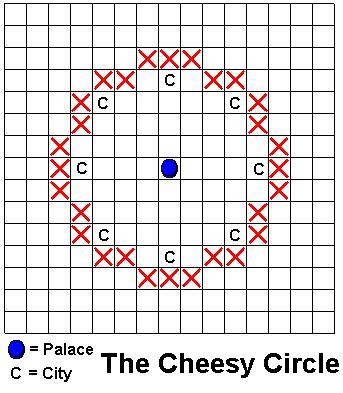 The ring of red X’s shows the distance at which you start paying distance upkeep. This formation (when used on standard maps) gives you nine cities with no distance upkeep and 16 gpt in number-based upkeep, for less than 2 gpt/city. Each city can work over 12 tiles, which should be enough to exhaust their health and happiness anyway. Ideally, you spam settlers to build the circle (at minimal upkeep cost), then develop the cities into high-shield military bases for a classical-age swordsman rush.** The only drawback is that you may miss out on resources by having such a compact territory. In practice it may be best to put some of the cities into the 1-upkeep region to obtain much-needed special resources, such as iron.

**This is a theoretical strategy at the moment. Next time I start a new game I’ll try some variation of this layout. It would seem perfect for the first GOTM (Expansive leader, hill/grass/river start, great swordsman UU)

No. But you don’t either if you’re still reading this.

In conclusion, city maintenance works more or less as advertised. The main headaches will come from having too many cities, but distance upkeep could potentially be annoying for small colonies in faraway lands. Consider carefully before founding a little city on a faraway continent for the sole purpose of claiming a banana resource, especially if you can get bananas by trading with your friends. Since many of the numbers are rounded, it is possible to take advantage of the system to minimize your city upkeep and play a more efficient game. I expect that some version of these calculations will figure in high-level civ4 play once there is such a thing as high-level civ4 play. Unless, of course, Firaxis decides to play with the formula in a patch or expansion, just like they did with ring city placement. Given their stated commitment to reducing the amount of math necessary to play the game, it is a likely possibility.

Please feel free to test and comment on my observations. They are as yet incomplete and any input is appreciated. I’ll update once I figure out the answers to remaining questions, such as how upkeep works on different world sizes and what the formula for civic upkeep is.

Addendum – Courthouses and the upkeep limit
Just to confirm the nature of the 6-upkeep limit for number of city upkeep, I placed 50 cities on a standard map and started filling them with courthouses. The courthouse affects the upkeep after the cap has been applied, so with courthouses in every city and state property, you should be able to pay only 3 gpt per city. While controlling all 7 holy cities and converting every city might be a pipe dream, doing this for 3-4 religions should be doable for would-be conquerors.

Update – Difficulty level and City Upkeep
After placing large numbers of cities in Warlord difficulty, it appears that difficulty level does affect upkeep. However, it does not affect the OCN. In warlord level, as in Monarch level, costs begin to accelerate after the tenth city. Hoverver, once the OCN is reached, costs increase at about 75% of the rate they do on Monarch. Since the OCN is unchanged, city placement shouldn’t be that different on different difficulty levels, but it may be possible to squeeze a few more cities in at lower levels. A comparison is shown below: 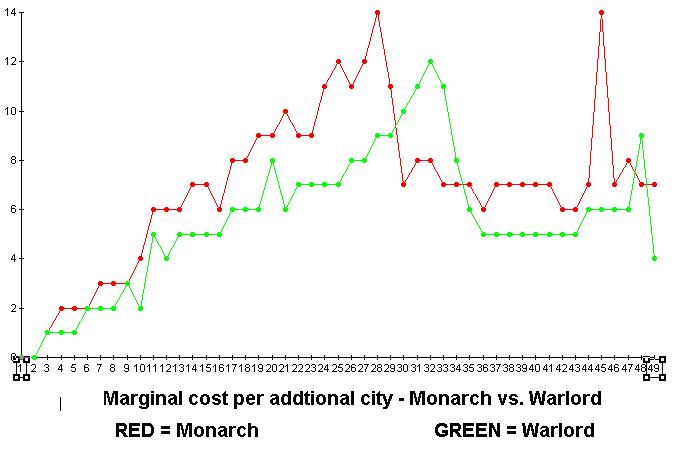 Also note that:
Warlord maxes out at 5 gpt per city
It takes longer for Warlord to max out city costs than Monarch. Thus there are actually certain points at which the next city costs more under Warlord, though the total upkeep is still less.

Civic upkeep
For this test, I started adding more and more size 1 cities and watching the additional civic upkeep for each one (F3). Preliminary tests indicate that on a standard map you start paying a flat fee for each size 1 city beyond the tenth. The amount comes to slightly less than 1 gpt per city for the starting civics. While it would be possible to catalogue rounding errors and exploit them the payoff would be very small and would need to take into account many possible combinations of city number, city size, and civic options, and would come to no more than 1 gpt anyway since civic upkeep, unlike distance upkeep, is one single lump sum rather than a bunch of small, separately rounded numbers. City size also increases civic upkeep, though to a lesser degree, especially in small numbers of very large cities. Each civic appears to contribute 1/5 of the cost, as determined by switching 2 civics to no upkeep. High upkeep is also much more expensive than low upkeep, as switching to organized religion increased upkeep from 50 to 74 gpt, apparently boosting the religion share of upkeep by 3.5 times (10 gpt to 34 gpt)! City upkeep at this point was ~350 gpt without courthouses, so it appears that under the most expensive civics available one could boost civic upkeep to the point where it could compare with city upkeep. And since courthouses do not affect civic upkeep, the cost of a large empire would be enough to make a would-be world conqueror think twice about high or even medium upkeep civics (no hereditary police states, please). Given this data, I strongly suspect that the organized trait has gotten a bum rap and will find its usefulness in domination games.