Forum member Grumalg has made a very extensive and handy reference file for Civilization VI. It’s 77 pages long in PDF format and contains the Civ6 Civilopedia info in easier to use table format. Check it out and discuss it on the forum! 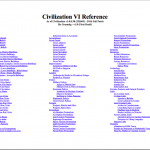 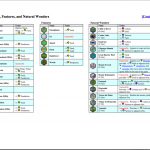 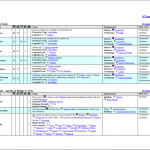 Thanks to Grumalg for making it and sharing it with the community!

This document is basically the Civilopedia converted to tables, plus some additional information from the civilization selection and government sections of the UI. It does not include the ‘Game Concepts’ section of the civilopedia.

The things I don’t like about the civilopedia are:

1) It takes a lot of clicking and scrolling to get to a piece of information.
2) Since you can only look at one thing at a time, it’s hard to compare things.
3) It covers the middle of the game screen, so you can’t look at the game situation at the same time.

The extensive internal linking allows you to reach pretty much anything with a small number of clicks (1-3 typically).

By placing the data in table rows, you can see more than one thing making comparing things easier. The document is heavily internally linked allowing you to drill down from the data in any particular table row to what it references. While it’s quite useful using Alt-Tab to view with a single monitor, it really shines with dual monitors where you can have the game on one screen and the reference on the other. That allows you to look at data *and* the game situation at the same time.

It wasn’t designed for printing and is likely not to print well without a very good printer due to small text in tables (8 point), alternate table row shading for eye guiding, and the massive amount of small icons embedded in the text. In any case printing it throws away one of it greatest strengths, the massive internal linking allowing jumping around quickly.

Since we don’t have access to the BLP files yet, all the icons/graphics were produced by screenshots, followed by cropping, background removal, and in the case of white icons color inversion to black. All graphic work was done in Paint.Net. It was formatted/composed in MSWord, then imported into Libre Office for export to PDF.

PDF was used for two reasons. In a PDF you have the ability to go ‘Back’ that doesn’t exist in MSWord (at least in the old version I’m using – OfficeXP). Also the .doc form was pretty big due to the massive use of text embedded small icons (full sized from screen capture – just shrunken in display size). I figured the 113 MB+ size could be an issue for hosting bandwidth. The conversion to PDF shrunk it to 13.6 MB.

The text is *mostly* verbatim from the civilopedia with minor exceptions. The long lists of many terrain types were often reduced to things like ‘Must be built on Hills’ or ‘Cannot be built on hills’ to save space in table row size. Some long sentences were reduced with shorter wording meaning the same thing to save space. Instances of ‘found or conquered cities’ were changed to ‘founded or conquered cities’. Instances where the civilopedia used ‘Jungle’ were changed to ‘Rainforest’, as Jungle is not an existing terrain type currently. There are probably some other changes I’m not remembering at the moment, but keeping as close as possible to the civilopedia was a goal.

If the civilopedia is in error, that error is repeated in this document. I’ll happily listen to any issues or suggestions. I hope to keep this document up to current as patches/DLC/Expansions occur, but it may take a number of days for me to incorporate such changes depending on how extensive they are.

The future may also include adding an appendix of effect cross references, so one can look for all the existing things that affect a particular aspect of the game. Currently the Espionage and Religious Apostle promotion section don’t have anything tree like, as I don’t yet understand that well enough to represent it yet. Other sections may be added as they are needed.