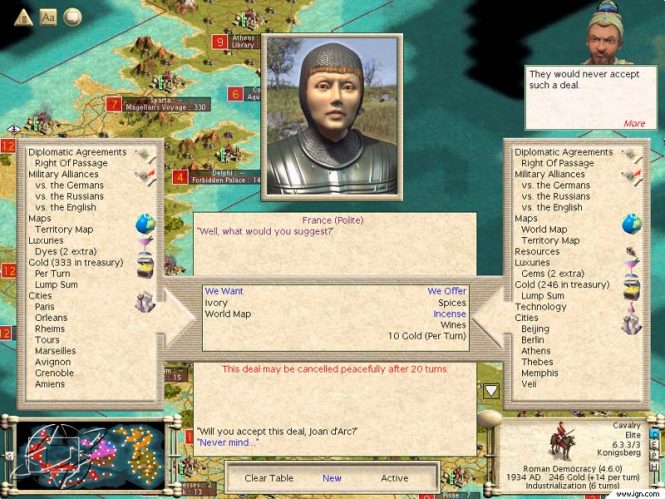 Soren Johnson has given a talk at this year’s “Game Developers Conference“, titled
“My Elephant in the Room: An ‘Old World’ Postmortem“. In this talk, he apparently also coverd the Civ3 bargaining table, since PCGamer has an article titled “Soren Johnson says Civ 3’s bargaining table was a ‘big mistake’“.
In this article they cover how Soren thinks that this design as a big mistake, since it basically turns diplomacy into a min/max strategy, without much actual diplomacy.

An excerpt:
“In another part of the talk, Johnson argued that while some players may say they want AI opponents to behave like human opponents, they typically don’t. When the AI starts metagaming—for instance, by ganging up on whichever player is winning for no reason other than to stop them from winning—the player can perceive it as unfair or out-of-character. In Johnson’s experience, players want AIs to act according to their fictional context rather than picking the optimal strategy like a person would.”

“Every time the AI got new technology they would [use the bargaining table to] contact all of their friends, rivals, even enemies to see what they could get in return by trading it away, which cost them nothing to do, but would get them a little something in return,” said Johnson. “From the human’s perspective, it looked like the AIs were a giant tech cartel and were selling techs to each other at bargain prices, but the AI was simply pursuing the optimal strategy.””

You can discuss this article in our forum here: https://forums.civfanatics.com/threads/pcgamer-soren-johnson-says-civ-3s-bargaining-table-was-a-big-mistake-gdc22.676073/