Disclaimer: This was created for Conquests.

City placement is one of the most important aspects of the game, as well as one of the parts of the game that isn’t the same for every game. While military is usually the same for most people, like building up a stack of swordsmen, or waiting for cavalry to take over the world, you have to be able to adapt to the terrain for city placement. It varies from difficulty level, map size, and victory condition!

Hopefully this guide will help you use your cities to your advantage. Enjoy.

Before we can even discuss the pros and cons of each regular placement pattern, lets go over the following terms.
C = city, x = tile in between cities

Optimal City Placement (OCP):
Usually CxxxxC.
Each city’s goal is to not overlap, and use the full 21 tiles.
You need a hospital to grow past size 12 and use all tiles.

Cities try to gain around 14-16 tiles. Some overlap is fine.
You don’t need a hospital, but it helps if you want to use all 14-16 tiles and get the benefits of metropolises (more unit support, etc).

II. What Type to Use and When

Each settlement pattern has it’s benefits and disadvantages. You should select city sites carefully, and weigh in other factors about your game as well.

First, some general information:
* The less water there is, the more land there is. That means there is more room for cities, so you might be able to get away with a sligthly looser build, and vice versa.

* The newer the age of the world (ie; 3 billion compared to 5 billion), the more hills and mountains there will be. This might throw your planning off a bit, so don’t forget to set up fishing villages (cities on the coast with little food besides water (ie; all mountains or hills) that build a harbor and library / markets to rake in the gold from the sea).
* When possible, try settling next to rivers/fresh water (free aqueduct), or on the coast, rather than 1 tile away, as then you’ll never be able to build a harbor for increased food.
* If you settle on food bonuses, you lose the food bonus. However, you don’t loose the shield / commerce bonus of tiles (except for the Despotism penalty), so it’s not too bad to settle on those, it’s just that they can’t be improved.

Now let’s look at the pros and cons of each terrain type.

* In the late game, you’ll have cities using all 21 tiles, making them huge productive powerhouses.
* They’ll give you a nice amount of territory.

Cons:
* You’ll need some sort of culture to connect all your cities via territory.
* Workers have to improve more tiles to get from city to city (since a city can act as a road. For example, if you have road, nothing, road, and you put a city in the nothing tile, it’ll act as a road connecting the two, rather than having a worker make a road).
* You will only get to use 50% of the tiles for 50% of the game, and 100% of the tiles for 50% of the game, so it averages out to 75% – so you end up wasting 25% of the tile’s throughout the game.

* You won’t have as many cities to produce units, commerce, shields, etc, in the early game.

When to use:
* Lower levels, when you can afford to have big city spacing. You can out expand the AI, and have more cities in OCP style than they have in their style. Also, you’ll have less corruption the lower the level, so you won’t be as penalized.
* Lots of land. If you have preferably 60% water and 40% land selected for your game, and you don’t have any immediate AI threats, OCP will gain you lots of territory.

* Will use most of the tiles before hospitals.
* Won’t need lots of culture to connect cities via territory.

Cons:
* It takes more than 1 turn to get from city to city with roads and a 1 move unit.
* Won’t get in as many cities as tighter placement, so you lose out on benefits of having more cities in a tighter pattern like more unit support (in Republic in C3C, each new town saves 2 gpt, and also gets in at least 1 uncorrupted commerce).

* This is good any time on lower levels when you can out expand the AI, or on higher levels if no AIs start near you.
* If you expect to get to Sanitation for hospitals (ie; a Space Race or Diplomatic victory, or a non-early Domination / Conquest), this works out well.

Tight Placement:
Pros:
* 3 tile separation allows to go from one city to another via roads.
* No culture needed to connect cities.

Cons:
* Cities won’t grow past size 12.
* Each city only gets around 9 tiles.
* Hard for the late game in terms of food, commerce, and production (wait, that’s everything) due to the cramped conditions. Most games using this style won’t last that late, though.

When to use:
* Lots of war games, or always war (AW). Since you can get from one city to another in one turn with roads, defending your cities is easy. Notice in the screenshots section how each city uses CxxC placement can get a unit from its city to at least 2 others in only one turn.
* Higher levels, where you need cities before there’s no land left. If AIs start near you, and you are going for early warring, tight placement really helps.

Cons:
* LOTS of corruption.
* You’ll hit the OCN quickly, relating to the corruption issue again.
* Cities won’t get past size 6 or 7, usually (each city gets 6 tiles).
* Production is rare.

* Rarely. Only in nation-wide cultural games should it even cross your mind – beyond the first half of the ancient age, it really doesn’t have much use.

I generated a random map in the editor, took a blank screenshot, and then proceded to do a dotmap using each of the style. I’m not the best dotmapper, and I only used MS Paint, but I hope this emphasizes the pros and cons of each style. 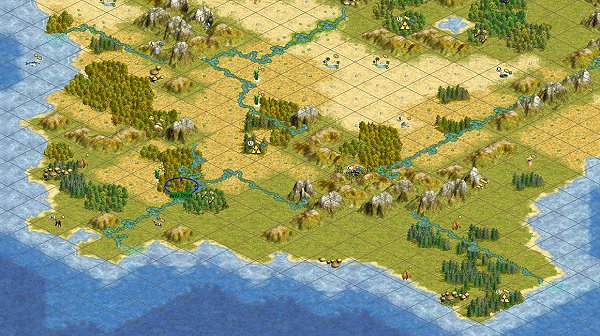 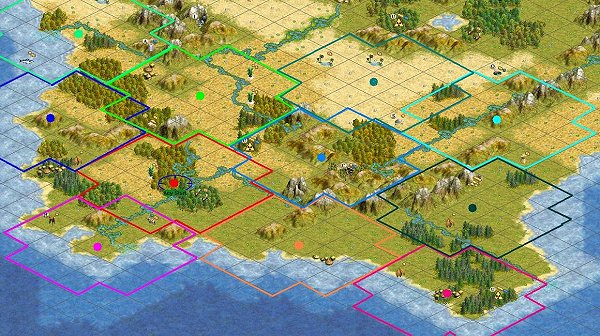 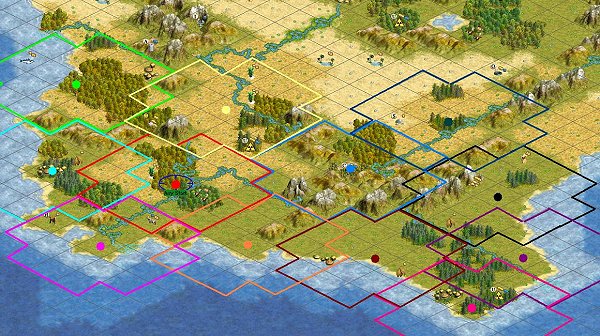 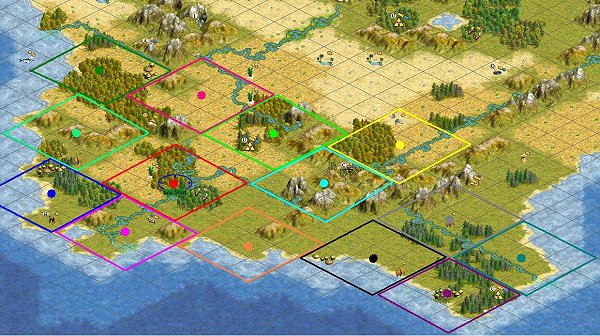 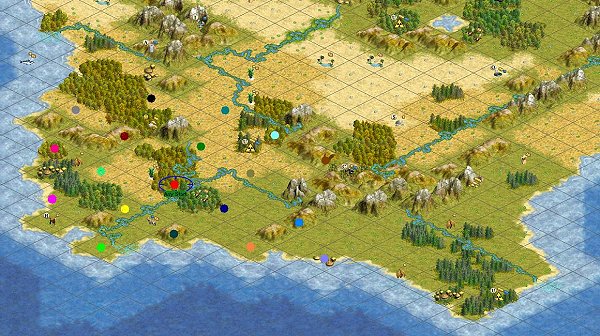